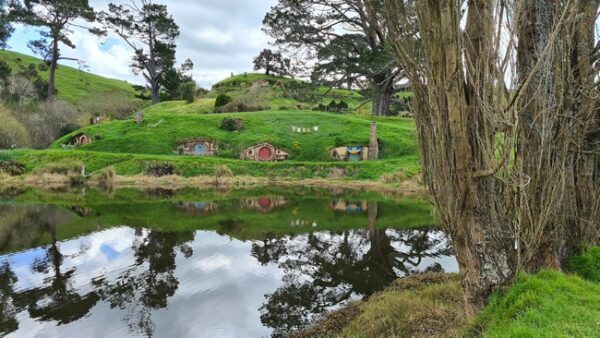 It’s so lush and lovely, for a moment my fellow tourists are stunned into silence. But then Middle Earth Madness descends once again and the chatter erupts.

“They say the series is the most expensive ever made,” one says. “That’s right!” someone else replies. “One billion US dollars! But geez, it’s worth every cent. Look at this landscape … It’s just as gorgeous as it is on the screen.”

For while the new TV series The Lord of the Rings: The Rings of Power is attracting massive audiences around the world – a record-smashing 25 million viewers gorged on it in the first 24 hours of its launch – this is where it all began: on a humble sheep and cattle farm pretty much in the middle of nowhere.

Even by the standards of the North Island of New Zealand, it feels very much like a lost kingdom. A two-hour drive south from Auckland, with the last 20 minutes on country roads so narrow and winding you’re sure you’ve gone wrong somewhere, Hobbiton, just outside Matamata, finally reveals itself in a display of otherworldly beauty that’s absolutely breathtaking.

The Kaimai Range Mountains stand stern guard in the distance, while the rolling green hills, dales and ponds of the 560ha Alexander farm, studded with the cutest of Hobbit holes, slowly comes into view. 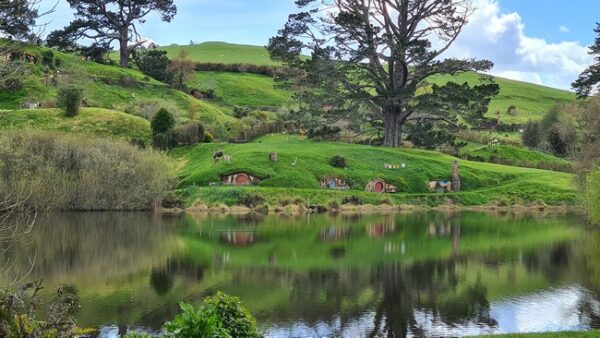 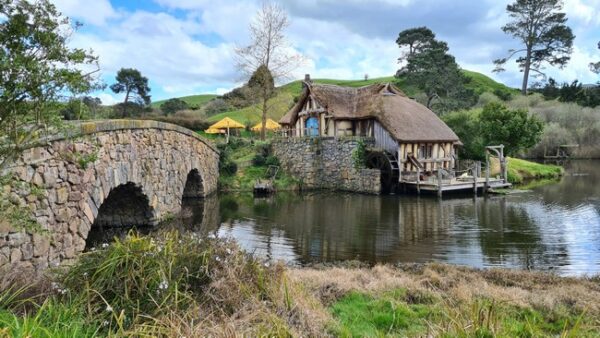 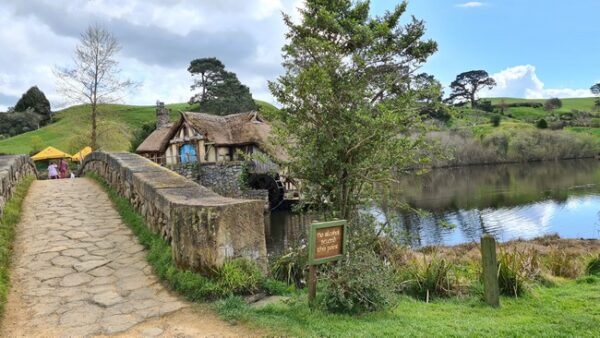 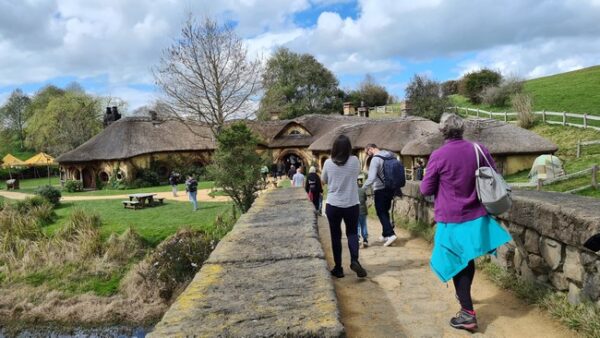 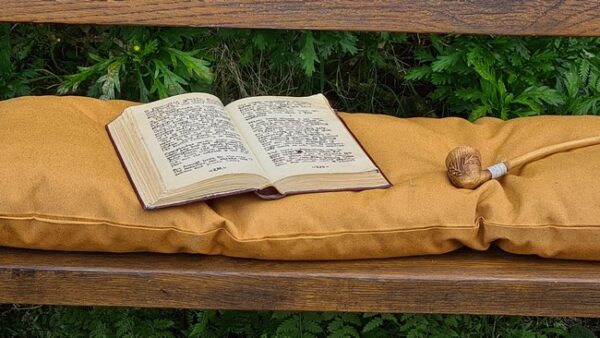 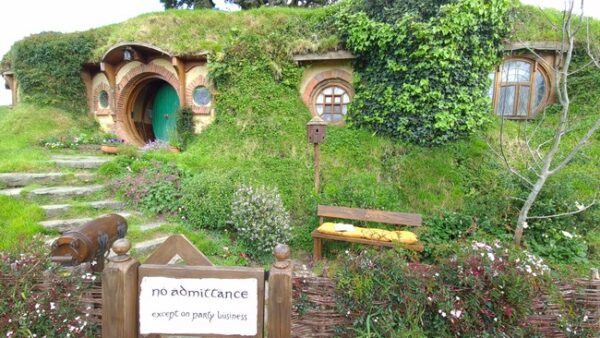 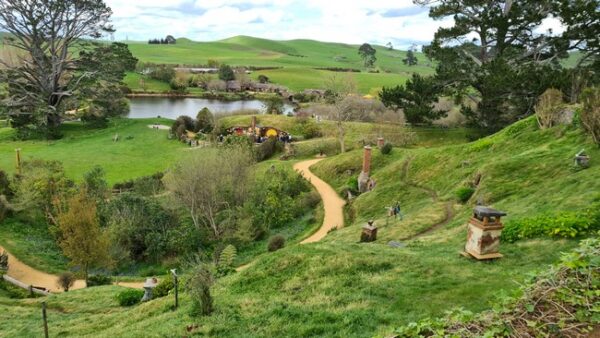 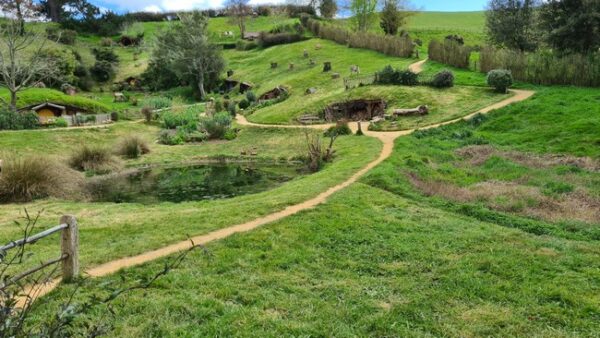 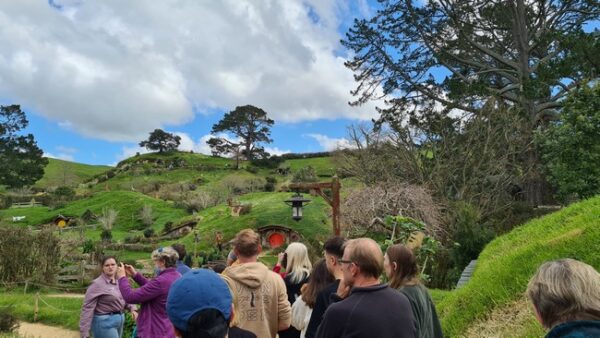 It was this idyllic site, 24 years ago, that Kiwi director Peter Jackson glimpsed from the air and decided it would make the perfect setting for his The Lord of the Rings movie trilogy. Thirteen years and 17 Oscars later, the set was rebuilt for The Hobbit Trilogy and this time, thanks to farmer Ian Alexander, who’d become tired of people constantly knocking on his door to visit where the films had been made, it was built out of permanent materials.

On its opening 20 years ago, it instantly became one of the country’s top tourist attractions, attracting more than 3.5 million visitors. And now it’s undergoing a fresh wave of popularity thanks to Amazon’s prequel The Rings of Power, now airing on Prime Video and the latest adaptation of the J.R.R. Tolkein novel (and its appendices).

“It’s been pretty crazy here since that started on TV,” says our guide Stevie, a nerdy Lord of the Rings tragic. “The crowds were just beginning to thin but now it’s started all over again. We’re deluged.”

She certainly is. This fairy-tale site of bucolic countryside and 44 magical Hobbit holes dug into the hills, complete with tiny clothes hanging on lines outside, miniature fruit and vegetables on tables and fishing lines by the ponds, is now firmly back on everyone’s New Zealand itinerary.

Cars drive up constantly to disgorge their occupants and, every 20 minutes, queues form to climb aboard the buses taking them on the two-hour tour. The guides in charge of every 40-strong group impresses on us the importance, when we’re back out and wandering around, of not straying too far in case groups merge and worlds collide.

But it’s so well organised, it just doesn’t matter that we’re all – just 15 per cent Kiwis and the rest of us from around the world – smitten by the passion part III.

Stevie asks for a volunteer to recreate the scene at the start of the first Oscar-winning Hobbit movie where Bilbo Baggins charges down a narrow path in The Shire, yelling, “I’m going on an adventure!” and a visiting Frenchman fits the bill nicely.

At every point, she explains how so many of the special effects worked, with places and perspectives fiddled with to make Hobbits look smaller and Gandalf, played by the venerable Ian McKellen, look taller. At other times, they used dwarves and an extra, ‘Tall Paul’, a seven-foot-one-inch-tall New Zealand policeman, to keep the illusion going, while some of the Hobbit holes were carved out at 60 per cent human size to make Gandalf grow.

That stunning oak tree overlooking Bag End is actually made out of steel and silicon, with its 376,000 fake leaves imported from Taiwan and individually wired onto the tree, and moss made from glue, paint, yoghurt and sawdust. But the watermill is pretty real, as is The Green Dragon Inn, the setting of so much Middle Earth merriment, where we’re all given a glass of The Hobbit Southfarthing beer or ginger ale from the barrels.

Yet there’s a tinge of sadness in Stevie’s voice when talking of The Rings of Power. While the first series was made in New Zealand, with its locations kept a strict secret until each episode airs, COVID shattered Kiwis’ dreams of keeping on the kingdom, with filming shifted to Scotland.

“But we’re hopeful that the third series will come back here to be filmed,” she says. “It wouldn’t be right not to.”

An edited version ohis feature first appeared in the Traveller section of the SMH/Sun-Herald newspapers. All pictures by Jimmy Thomson.