The Mild Rover
Home Advice and info Pay attention! Your guide is talking 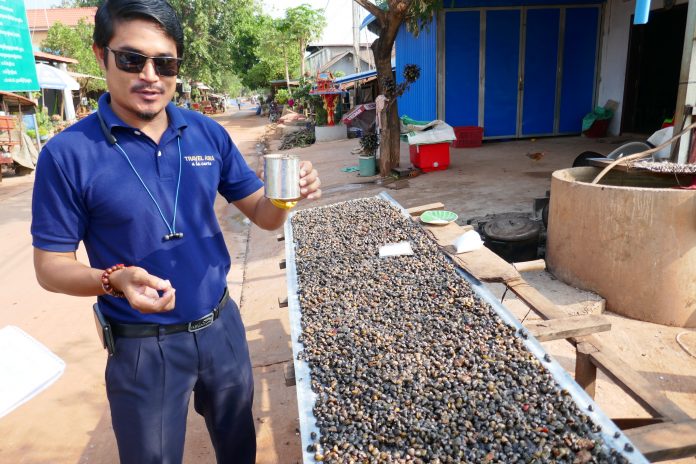 Our tour guide Mr Sok looks angry, very angry. “But I have told you this before!” he snaps, not even bothering to try to conceal his irritation. “Were you not listening?”

It had been an innocent question about how long Cambodia’s Angkor Watt had taken to build, but Mr Sok takes it as a personal affront. After all, he’d delivered a 45-minute preamble to my visit the day before, but I’d tuned out after 15 and obviously missed the most important part.

He sighs deeply. “OK, I will tell you again,” he says with a show of great magnanimity. “Now pay attention, please. In the ninth Century AD, King Jayavarman the Second … “

A good tour guide can add so much to a traveller’s understanding of a landmark, a city, a country, a culture. A bad one can detract hugely from the experience.

As I tried hard to concentrate on Mr Sok’s droning soliloquy about the various kingdoms of Cambodia – that would only turn out to answer my question in the 39th minute – I had a horribly queasy feeling that he was going to be in the latter group.

But however awful they might turn out to be, I’m not belittling tour guides. By anyone’s measure, they do a bloody hard job.

Pull a rabble of very different people together from various backgrounds, of diverse ages, and often with sharply contrasting expectations, and you’ll have trouble anywhere. But being the person in charge of taking them to a place with which they’re unfamiliar, feeding them food they don’t know, and doing things that may be completely outside their comfort zone, can so easily turn into an absolute nightmare.

For it can take only one bad seed to start the rot in any situation, and it can then be almost impossible for a tour guide to stop the spread.

I was on a tour around southern Europe, for instance, where one woman was always the last out of bed to breakfast, the last to bring her bag down to the hotel foyer and then the last to get on the bus every day. At every coffee and meal break, we all had to hang around to wait for her to return to join us and then listen to her complain incessantly about … pretty much everything.

We were all growing more and more fed up with her and, as a result, with the trip. Her grouchiness was becoming dangerously infectious.

The tour guide tried valiantly to solve the problem by having a quiet word with her. Unfortunately, it had no effect. But then he did the best thing possible: he left it to us fellow travellers to become so irritated, we tackled her ourselves, demanding she change her behaviour. It worked. Smart move.

Another tour guide on a friend’s trip around China was more proactive in trying to quieten a pair of whingers. After a week, they declared they were sick of eating rice and insisted they needed “good Aussie food”.

The resourceful guide phoned ahead and, at the next destination, while everyone else was ushered into a banquet hall with a table laden high with delicious-looking local specialities, the crabby couple were shown into a small room off to the side. There, they were treated to what their hosts considered to be typical Australian gourmet fare – plates piled with curling cheese sandwiches.

No one heard a peep of complaint out of them about the food again.

Being a guide is a skilful balancing act, to be sure. They’re expected to be cheerful and smiling at all times, unfailingly good-humoured in the face of usually startling ignorance about their culture and country, pretty much fluent in everyone else’s languages and to display the patience of Job.

At the same time, they need always to be able to fulfil some basic duty of care in making sure their guests are feeling safe and comfortable, as well as demonstrating a degree of highly-developed empathy somewhere in the mix – so notably absent in Mr Sok – to judge exactly how much information their clients would like, or can handle, and how to make it both accessible and palatable.

The best seem to perform to their audiences, with enthusiasm, personality and an openness and generosity about their own lives in the place you’re visiting. And I’ve experienced some wonderful guides like that over the years.

In Egypt once, it was the first time overseas for one of our tour party who was horribly homesick and terribly out of his depth. Our guide went out of his way to reassure him, pay him special attention and always keep a kindly eye on him to make sure he was OK.

In southern Iraq, in the old Sumerian city of Ur, I met the most enthusiastic tour guide of my entire life. He was third-generation guide Dhaif Muhsen (corr) who showed me around the Ziggurat, the massive stepped edifice built in 21 BC in the desert 345kim south of Baghdad, only a little newer than the pyramids at Giza.

Despite the fact we both had to wear body armour because of the war, he oozed excitement. “I haven’t seen many tourists for years,” he explained. “And it is so wonderful to show you the beauties of my country – and before any more rockets come to destroy it.”

Yet there have been some horrors of guides, too.

In India, I was driven from Delhi to the Taj Mahal and then Jaipur by Mr Anand, who spoke constantly (and I mean constantly) in such a high-pitched whine, it gave me a headache for three days straight.

It was also hard to warm to a tour guide in southern Ethiopia who kept vanishing at every opportunity, on increasingly inventive pretexts (I have to go see my wife; my friend has died; my girlfriend needs to talk to me).

OK, I get it. He perhaps didn’t want to show me around or talk to me much, or maybe couldn’t stand the sight of me, but leaving me in a remote Daasanech tribal village for four hours, full of young men drinking and fooling around with AK47s, with not the slightest hint of how to get out of there, was a bit rich.

A local tour guide in our own Daintree also appalled me by being so disparaging of Asian tourists and local Aboriginal residents, I complained both to him, and his company.

And once I had a tour guide in Tanzania who insisted on speaking to me and my companion, who happened to be a zoologist from the Classic Safari Company, as if we were small children. “You remember The Lion King?” he cooed to us. “Well, some of the animals you’ll see …”

But then the good ones are priceless for the valuable insight they give you into a whole new world.

I was delighted when my little boy guide Soni in Varanasi, India, showed me where he went to school as well as his aunt’s house where he ate lunch every day, in addition to the obligatory stroll around the ghats of the Ganges.

It was equally fascinating to hear the tales of the bizarre world that’s Lightning Ridge in NSW from a local who confessed she’d visited, fallen in love there, and just never been able to leave.

And I loved the tour guide in Siem Reap who told us about his guilty love of performing karaoke alone (his voice was too bad to do it in company, he insisted) on his afternoons off and his other passionate love – of rice.

His chats were frequently interrupted by calls from his mother who phoned to check on his welfare after he’d left home to live with an aunt in order to study since rejecting the family tradition of becoming a fisherman.

I must confess I learnt far more about Cambodia from him than on the five previous days with Mr Sok. Alongside the wonders of the stunning Angkor Watt, the memory of him that endures most strongly is that sterling cry that so many tour guides must secretly long to say, but usually resist: “Now pay attention, please!”