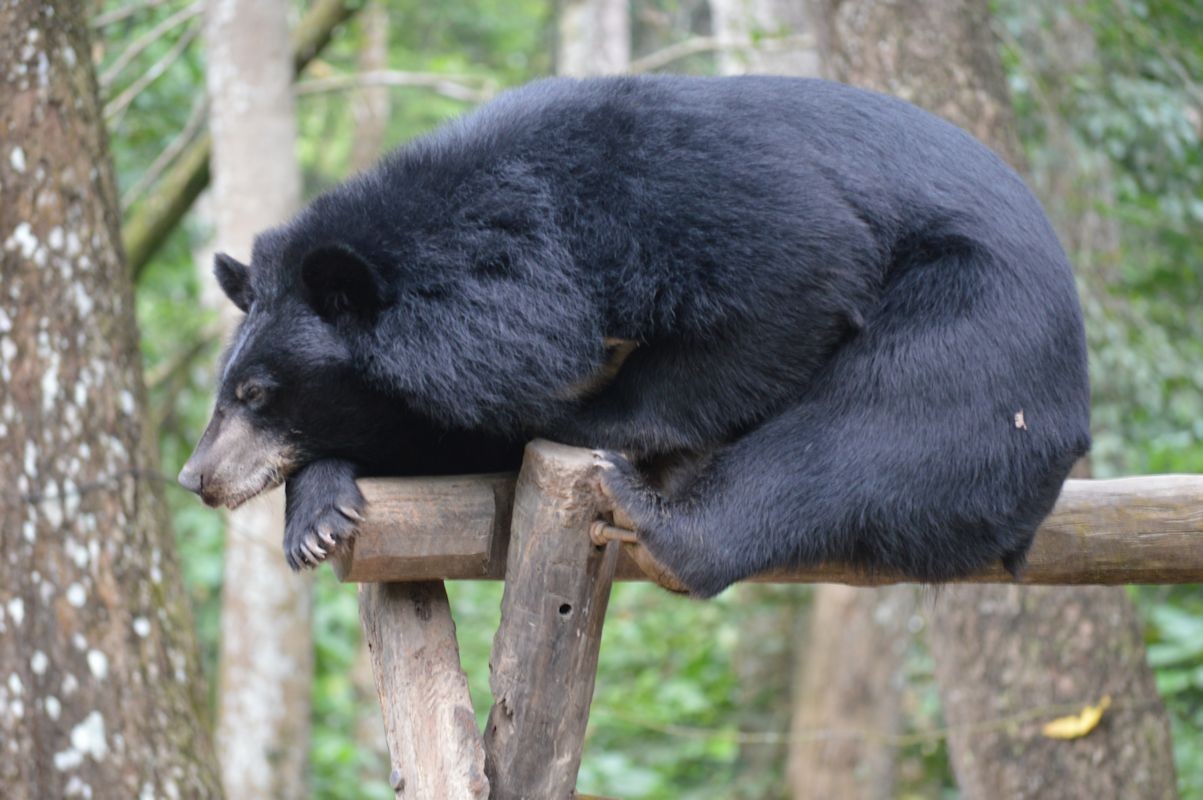 The old moon bear is not for sharing. A cracked open coconut has been tossed into his enclosure and he is alternating chews with muffled growls as the younger bears sidle up .   If they get too close, the cute bundle of fur turns into a snarling flurry of fangs and claws.  This is no teddy bear.

But the youngsters are smart and fast.  While one of them distracts their grizzled companion into a threatening lunge, the other snatches the coconut and races off with it, leaving the old timer to moan quietly at his misfortune.  The law of the jungle applies even in the safety of the Tat Kuang Si bear rescue centre just outside Luang Prabang in northern Laos.

You feel sorry for the old chap, until you remember what brought him here.  Tat Kuang Si is home for 26 moon bears that have been rescued from various horrors inflicted on them.  The lucky ones were simply caged outside restaurants or the homes of the rich and the powerful, for the amusement and amazement of guests.

Others had tubes brutally driven into their stomachs and permanently fixed there, to harvest the bile so highly prized in Asian traditional medicine.  You don’t want to think about the horrors they endured to immobilize them and render them harmless to their heartless captors.

So, all in all, they are better off here, even if someone has stolen their lunch. Over in the distance, a female bear hobbles gamely through her paddock on three legs, the fourth having been amputated.  It had become infected following her paw being cut off to make bear paw soup. Now she’s getting around just fine.

We shouldn’t dwell on the human capacity for cruelty to other animals – this centre is all about compassion and caring.  And the best news is that if you truly care about the fate of these animals, you can do something about it, much more directly than just sending money.

Tat Kuang Si and its bigger equivalent in Cambodia, Phnom Tamao, are leaders in “Voluntourism” – schemes where you spend a couple of weeks working for a charity and pay for the privilege too.  Run by the Free The Bears organization, this is the most Australian of oversees experiences.

It’s just over 20 years since Perth woman Mary Hutton saw a TV documentary about the plight of Asiatic bears, kept captive in appalling conditions while their bile was drained and the paws amputated.  From raising a petition outside her nearest shopping centre, Mary’s involvement and soon grew into the Free The Bears charity.

Helping Australian businessman John Stephens to relocate bears he had rescued from Cambodian restaurants led to the creation of the Phnom Tamao centre – now the world’s largest sanctuary for sun bears and, crucially, providing vital education for today’s children in the hope and belief that they will grow up to build a world where these cruelties are no longer acceptable.

As her charity’s influence spread, Free The Bears has been instrumental in rescuing hundreds of animals in South-East Asia and an amazing 500-plus in India. When we visited Luang Prabang, one of their workers told us that a weekend sweep of a nearby jungle area had cleared more than 100 bear traps.

So what can a voluntourist expect? Well, you won’t be cuddling many bears, for a start.  These are wild animals and the closer they can be kept to their natural state the better.

But you will be feeding them, cleaning up their habitats (when they’re not in them, of course) and getting to know them much better than a bus trip to the zoo could ever provide. You’ll be kept busy – either on general duties or on one of the specific tasks such as maintaining or building enclosures and other tourist and education facilities.

Accommodation is going to be clean and comfortable – about or better than the standard of a decent backpacker hostel.  You will be expected to clean your own room, make your own bed and cook your own breakfast.  Lunch can be bought at the sanctuaries but dinner, local food cooked by your housekeeper, is provided.

Many travelers will see this as a way to really get to know a local culture just by being in it but there are others for whom simple foreign cuisine may be a sacrifice too much, even for the bears.  In that case, Free The bears provides a list of ‘necessities’  such as diet soft drinks and breakfast cereal you would be advised to being with you.

Both of Free The Bears centres take groups, couples and individuals but you may have to be flexible with your times, depending on demand.

“For Cambodia we have a maximum limit of 6 volunteers per week, the idea being that with smaller numbers we can offer a better experience,” says Free the Bears CEO Matt Hunt.  “However, we do occasionally break this rule for people travelling in larger groups.

“For Laos, we tailor specific trips throughout the year  – about three per year – the programme there is smaller and the trips are based on specific projects that we would like to accomplish during volunteer trips.

“There is no waiting list, but there are periods of the year which have already been booked out by other people.  We usually try to accommodate more people, but more often than not volunteers are flexible with their dates and join us on another day.  And we do get return bookings.

“On average our volunteers tend to be 21 – 35, but we have had a whole range of age groups visit.  The minimum age is 21, the maximum is unlimited as long as the volunteer is able to physically cope with strenuous work in tropical climate.”

That’s a point worth making.  These trips are not like some Voluntourist holidays where you spend your time faffing around taking selfies with ‘grateful’ locals.  Free The Bears is a working holiday where you are expected to work.

The Luang Prabang reserve, though smaller, does have the advantage of being 20 minutes from one of the most picturesque and largely unspoiled cities in South East Asia.  And two minutes from spectacular waterfalls and rock pools where you can go for a cooling dip after a hard day’s bear-freeing.

Your weekends are your own at both reserves so you will get the opportunity to do the regular tourist thing too.  The dawn procession of monks in Luang Prabang as they collect their food from local people (they are not allowed to cook for themselves) is a sight worth seeing.

But the bears are what you’ll be there for, and it’s your memories of seeing these beautiful animals up close and imagining the horrors they have endured that will last as long as the shelters and fences you help to build to protect them.

They may be fenced in but, partly thanks to you, the bears are free.

Cycle and save with World Expeditions’ Asia Sale

Save 20% on a Darwin hotel this summer