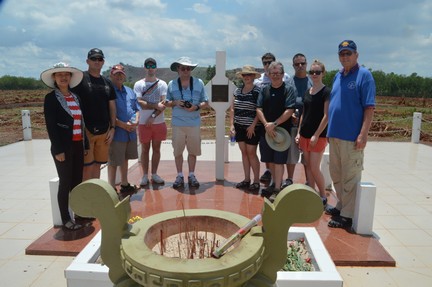 With Vietnam increasing in popularity for all sorts of tours, including the recent, chaotic 50th anniversary of the battle of Long Tan, Tunnel Rats author Jimmy Thomson recalls how his first tour as a guide began with less than military precision.

I was standing in the courtyard of a small temple in Long Phuoc, south-east of Saigon, in front of a gold statue, explaining to a small group of travellers that the man on the plinth became a hero of the Vietnam War by working out how to steal and recycle American anti-personnel mines for use against Allied troops.

I was unashamedly cribbing the story from a Vietnam Veterans’ newsletter, in which I had seen a
picture of the statue which I had spotted as we drove past.

Then I noticed Tam, our official tour guide, and Trang, the local contact, looking concerned as they whispered conspiratorially. When I finished, Tam sidled up to me.

“This is the wrong hero,” he said with an apologetic smile. “This hero fought in the French war, not the American war.” Trang nodded.  He’d been a friend of her grandfather’s and died before what we call the Vietnam War even started.

And there, in a nutshell, was why every package tour needs local knowledge to back up imported ‘expert’ information. The alleged experts on this, the inaugural “Tunnel Rats” tour, were me and co-author Sandy MacGregor.  As a young captain in 1965, Sandy and his men discovered the Vietcong tunnel systems in Cu Chi and we have now written several books based on their adventures.

But I should have checked my facts.  So much gets lost in translation in the tourist game. Guide books are instantly out of date, and misinformation, myth and unreliable observations are etched permanently on the internet.

And then there is the stuff that is left out.  You could travel the length and breadth of the former Phuoc Tuy province – the Australian Army’s operations zone south-east of Saigon –  and, apart from the cross at Long Tan, see no mention that Aussies were ever there.

And that’s why you might choose a military history tour rather than a standard day trip. It’s also why a good tour guide can make the difference between an OK holiday and an unforgettable experience.

If you want a special experience, do your homework and be prepared to pay a bit more.  If you wait until you get there before you book your tours – and there are plenty on offer – ask the right questions.

How many people are going to be on the day tour? Are you going to be taken to souvenir shops and restaurants where the guide will get commission on everything you buy?  Can you change the itinerary along the way if you see something more interesting? How good is the guide’s English (hopefully a lot better that your attempts at the local lingo).

In Vietnam, you will be expected to tip tour guides $5 per guest per day, so you are entitled to make sure you are getting what you want. Just tell the tour guide what you are looking for.

For the militarily minded, you want to go into the Minh Dam Vietcong cave headquarters in the Long Hai mountains and see the concert bowl at the Nui Dat bases where Little Pattie played the night before a platoon of diggers bumped into a massive Vietcong army at Long Tan.

It took me a couple of trips to Vietnam to discover all the relevant sites to which I later took tourists. So how did I cross the line from tourist to tour leader?  Researching our first Tunnel Rats book, I’d been to the places where Australian sappers (army engineers) had been stationed and it had occurred to me that this might make the basis for an informal tour.

Sandy could tell the stories that didn’t get into the book and I would look after the day-to-day stuff. Insider Journeys (formerly TravelIndochina) worked out the logistics for us and provided the never less than excellent Tam as our tour guide.

The ten guests on our first trip were quite a mixture: two twentysomethings who’d never been out of Australia, their Dad, a Digger who’d served during the Vietnam War but had never made it to Phuoc Tuy, a couple in their 60s whose friends and family had begged them not to take such an arduous trip, two keen hiking mates, and an old friend of Sandy’s – an intrepid septuagenarian lady who took the daily adventure in her stride.

Also along for the ride was author and journalist Mark Dapin, there to write a profile of Sandy and about to start work on Nashos – his history of National Servicemen in the war which has just been shortlisted for the Premiers literary awards – and then his current novel “R&R”, set in the party town of Vung Tau.

Thanks to our local guides, we saw even more than we had planned, including Vietcong caves that one guide had said we wouldn’t be able to explore, and an amazing military museum in Vung Tau created by a millionaire expat Brit, that wasn’t in any guidebook.

In Saigon, our impromptu walking tour from the hotel, through a park to the “backpacker” area included encounters with ballroom dancers in the park and chatty locals who simply wanted to practise their English.  Our decision to divide the group between those who wanted to try street food and others who preferred a sit-down restaurant worked well for both lots and provided plenty of fodder for discussions later.

Thankfully, rather than being alarmed by our ‘informal’ approach to schedules, everybody seemed excited by the sense of adventure. I encouraged people to step out of their comfort zones. Whether it’s cajoling them into heading down a tunnel or trying a local delicacy that they’re wary of, I realized I wasn’t doing anyone any favours by reinforcing their fears and phobias.

The last tour I took – and I have now done four – the only people who got upset tummies were the couple who insisted on eating Western food.  Think about it – do you want to eat food the chefs prepare all day, every day, or something they occassionally do for fussy travellers?

But I’ll never forget the cry of one older guest: “I don’t like Asian food – can’t we go to a Chinese restaurant?”

Real travel doesn’t fit neatly into fixed agendas and schedules.  Even when you are in charge of a group, it’s about going with the flow and grabbing opportunities as and when they arise. The secret is to meet and surpass travellers’ expectations.

Oh, and there was a sequel to the ‘wrong hero’ story.  A few months later Mark Dapin returned to Vung Tau to further research R&R and was in a bar telling an Aussie expat about the idiot tour leader and the wrong statue.

“Stop. Stop,” his drinking buddy wailed.  It turned out he was the one who had written the erroneous story in the newsletter. See, what he’d really needed was a good tour guide.

Jimmy Thomson and Sandy MacGregor have co-written two books about Australian sappers in Vietnam, Tunnel Rats and A Sappers War, both published by Allen and Unwin.

This piece originally appeared in the Sydney Morning Herald Traveller section, in May 2016.  It is partly based on this article on Mildrover.com