Vietnam has plenty of attractions, writes Jimmy Thomson, but when you travel with The Quiet American by Graham Greene in your pocket, and Indochine on your laptop, a whole new world opens up to you.

There’s something magical about travelling to the locations of your favorite works of fiction. It’s not as if Vietnam doesn’t have enough attractions of its own, but add the books and 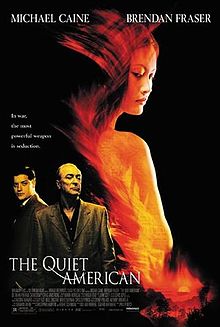 movies The Quiet American, Indochine and The Lovers, and the very real places that inspired them, and the magic is enhanced many times over.

In fact, my own next crime novel – Tunnel Vision, due out in September  – is set in the very heart of Saigon.

Wouldn’t you love to have a drink on the same terrace where Grahame Greene and his fictional hero Thomas Fowler – played superbly by Michael Caine in the 2002 Phil Noyce film version – consorted with spies and newspaper reporters before the American War.  Let’s not forget that Greene was  a spy as well as a writer.

We can stroll down the former Rue Catinat (now Dong Khoi) where both Greene and his creation lived, past the remains of the Eden Cin theatre where the mother of Margaret Duras, author of the semi-autobiographical novel The Lover, played piano and where Duras went to escape the mundanity of her teenage life.

We can take a trip to Cholon, Saigon’s Chinatown, which is not only where Fowler was first made aware of terrorist plans to explode bicycle bombs in the city centre but it’s also where Margaret Duras’ heroine met her Chinese paramour in his apartment.

It’s also where the hated President Diem and his brother were hunted down and took refuge in a Catholic Church before they were assassinated (reportedly with the approval of US President Kennedy).  And there’s the Peace Noodle restaurant where American soldiers ate while, unbeknownst to them, Vietcong leaders were plotting upstairs.

How about we travel to Sa Dec in the Mekong Delta where the young Duras went with her lover and where he is now buried with his wife?  Then visit the Cau Dai Holy See in Tay Ninh.  It was on the journey to Saigon back from this remarkable place that Fowler and his ‘Quiet American’ companion  Pyle were ambushed by Viet Minh guerillas.

Getting even further out of Saigon, we should stop in Hoi An, which doubled as the Saigon riverside in the Phil Noyce movie and then Hanoi and the Metropole Hotel where Greene actually wrote the book.

Many the urban scenes in Indochine were actually filmed in Penang, Malaysia but along the way visit Hue, location for the marriage of Camille and Thanh. And finally there is Halong Bay, the location for so many spectacular scenes in the Catherine Deneuve movie .

Prior to a recent trip to Vietnam with a writer friend, I re-read the The Quiet American and watched the 2001 Phil Noyce movie, starring Michael Caine and Brendan Fraser, as well as Indochine and The Lover.

There is a time-shift between these three works. It’s interesting to read reviews of The Lover and Indochine as they tend to casually date them as “pre-war”.  But which war? I 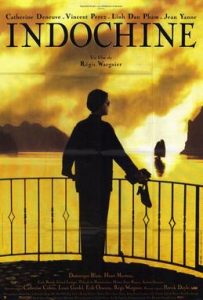 n fact, The Lover and Indochine are set in the early 1930s which is pre-WWII, for sure, but also before two other 20th Century wars in Vietnam.

Indochine, the story of a French rubber plantation owner and her Vietnamese adopted daughter who fall in love with the same man spans the quarter century to the end of French rule in 1954, overlapping with The Quiet American.

That novel is set after WWII,  during which Ho Chi Minh’s communist Viet Minh was formed to fight the occupying Japanese and stayed around to fight the French who reclaimed their colony when the war ended. The French lose their war against the Viet Minh, which will lead to the break-up of the country into the Communist North and pro-American South.

As with so many of Greene’s other novels, it’s written on the eve of a time of great upheaval as his
protagonists deal with the emergence of a mysterious “Third Force” and, symbolically, a three-way love affair.

“If you haven’t read the novel, it’s both a simple triangular love story and an amazingly prophetic, 180-page prediction of how America’s entry into the politics of Indochina will end in tragedy,” wri 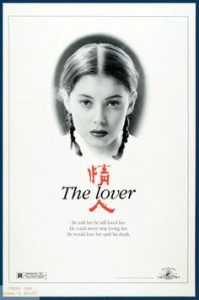 “The Quiet American by Graham Greene ought to be required reading for anyone planning a visit to Vietnam,” says the Literary Traveler website. “This prophetic portrait of the failing days of French colonial rule … stands as the definitive, though fictionalized account of the terrible confrontation between moral dissipation and dangerous naivete that plagued this tropical nation for so many decades.”

It’s been said that The Quiet American is as close as you’ll get to a guidebook in the form of literature. The fact that Greene actually lived, ate and drank in the locations he described, all the time spying (albeit reluctantly) for MI6, adds a certain piquancy.

“Rue Catinat runs through The Quiet American like a spine,” writes Meacham. “Much of the action takes place on the street itself or in buildings close by – the Continental Hotel, the Majestic Hotel, the beautifully ornate Saigon Opera House, the Saigon Central Post Office designed by Gustave Eiffel, and the various apartments where the main characters live.”

The late American celebrity chef Anthony Bourdain revealed in an interview he has always been drawn to Vietnam because of Greene’s novel and its themes of  moral compromise and sacrifice.

As the author of two books about Australian soldiers in the Vietnam war, I have been there and done the military history tour thing several times. But now,  looking through the prism of books and movies set in Vietnam, it has opened up a whole new way of looking at the country.

So let’s take a walk down the Rue Catinat, have a G&T on the terrace of the Majestic and visit some of the landmarks mentioned in the books and shot on film.  I am planning to lead a luxury travel tour just like the one above, with Wendy Wu Travel, for February/March in 2019. It will be a small group tour so let me know if your interested, as soon as possible, by emailing me on mail@jimmythomson.com.

Needless to say, plenty of writers have taken this journey so here, to whet your appetite, are a some features from a variety of magazine and travel website sources.

Time magazine: In the Footsteps of the Quiet American

Saigon on the Silver Screen:  The Lover