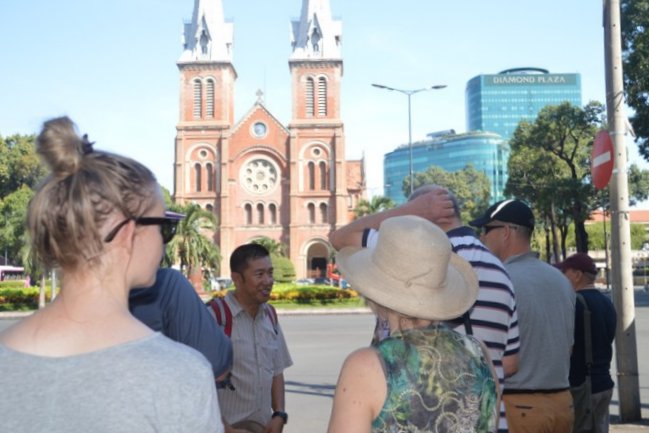 If you are ever in a position to be a tour guide – official or otherwise – there are a few golden rules you show try to follow … beyond getting your fellow travellers to follow you.

1. Listen to the local guides

These are local people who have first of all gone to the trouble of learning English and then taken the time to learn about their local area. They know the wrong hero from the right hero and they can talk to the locals in a way that you never could, even if you do speak the language.

2. Don’t only listen to the local guides

Local knowledge is one thing but the most important priority is what the customers want and if that doesn’t fit the guide’s set menu of what to do and see, that’s his problem, not yours.  When I did my recce of the Cu Chi tunnels on my own, I was assured by my guide that the two sets of tourist-tunnels were identical in every way

This is not true.  One set was short runs linking authentic underground bunkers —  meeting rooms, kitchens and hospital —  but the tunnels had been widened to accommodate bulkier Westerners.  The other one had one long tunnel that went down three levels then back up again and was a tight squeeze even for the smaller visitors. To get the full experience, you had to visit both places which were only 20 minutes apart by road.

3. Never underestimate the lure of shopping

The one criticism of our tour was that we crammed so much in that our guests didn’t have as much time as was desired to hit the shops and markets of Saigon. Vietnam may be Communist but Ho Chi Minh City shows capitalism in its fullest bloom as well as being one of the ‘knock-off’ capitals of South-East Asia so this was a major oversight.  Next time there will be an extra day to allow people to drop some dollars on the southern capital’s traders.

There’s always one person missing from a group photograph – the person taking the picture – and that should be you. So when it’s photo or video time, you should be behind the cameras, not in front of them (unless specifically invited, of course, when you should treat it as the honour that it is).

5. Don’t be restricted by the most timid member of the group.

Yes, there will always be someone less willing or able to undertake the more challenging adventures but your job is to find a way of keeping them occupied while everyone else is off making the most of the trip.  And if that means you miss out on some of the fun, so be it. It’s your job – not a holiday.

Regaling your group with a tale of how, the previous night, you were ‘abducted’ but managed to escape from middle-aged mama-sans on motorbikes who offered you temptations that ranged from the immoral to the illegal may cast you as ‘larrikin leader’ in some eyes but ‘dangerous dickhead’ in others’. For everyone who admires your chutzpah in escaping the situation, there will be another who thinks you’re a clown for getting into a tight spot in the first place. I speak, of course, hypothetically.

The last thing people need when things start to go pear-shaped is for the person who’s in charge to be running around like a headless chook.  Things generally sort themselves out because that’s what things generally do.  Joining in the mutterings of gloom and irritation when things don’t go to plan doesn’t help anyone.  Take charge and make decisions; they may be the wrong decisions but the world isn’t going to end and when it doesn’t, you can take full credit.

8. Listen as much as you talk.

Yes, you are there to impart your acquired wisdom, experience and information. But there’s no way of telling exactly what each tour member is hoping to get out of the trip unless they tell you.  So keep your ears open, try to get a sense of what each individual is looking for then do your best to deliver it (see section on shopping).

9. Encourage people to step out of their comfort zones

Whether it’s cajoling them into heading down a tunnel or trying a local delicacy that they’re wary of, you’re not doing anyone any favours by reinforcing their fears.  On the other hand, I was almost persuaded to try a raw pork dish that, it turns out, has caused blindness in Westerners.  Cautious adventurism is the appropriate phrase.

And that’s because real travel doesn’t fit neatly into fixed agendas and schedules.  Even in charge of a group, it’s about going with the flow and grabbing opportunities as and when they arise. The name of the game is, and always will be, meeting and surpassing travellers’ expections.