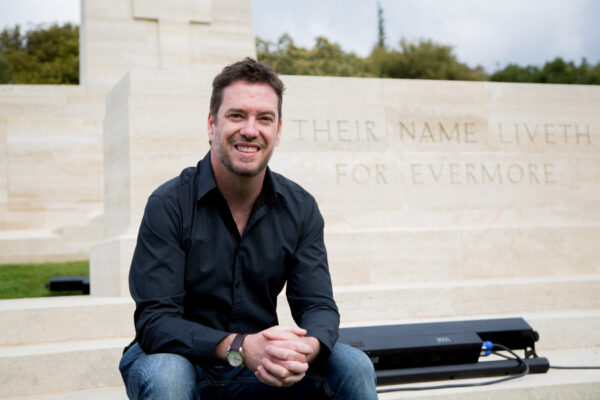 “Our military history is so ingrained in the Australian psyche,” says Mat McLachlan, “You can understand why people have called it our secular religion.”

“It’s mainly baby boomers with a family connection of some sort,” he says, “but then you get young people who may be backpacking in, say, Turkey and decide to head down to Gallipolli because, well, that’s what you do.”

He sees the trends as highly cyclical.  There was a downturn in trade immediately after the peak of the  Gallipolli centenary last year – simply, he says, because so many people had done the trip –  but now it’s starting to pick up again with interest in the European theatres from the First World War.

“So many Australians died there that it will always be important to us,” he says, adding that the upcoming centenaries of the battles in Flanders will just renew existing interest.

Meanwhile, his company is starting to get interest in WWII battlefields in North Africa and recently took a group to a remote island in Borneo – that he admits he had never even heard of –  where their relatives had fought and been held prisoner by the Japanese.

The cycle is just beginning to pick up in Vietnam, he says, and the debacle over the Long Tan celebrations will do nothing to dim that.

“There was a lot more outrage in the Australian media than there was on the ground in Vietnam,” he says.  “All we had to do was be sensitive but, to be honest, I think the way some of our people handled it was unfortunate.

“The Vietnamese had made it clear that they didn’t want us to make too big a deal of it, keep it low key, and we just ignored them. It’s amazing that they allow us to have the Cross there at all. They lost a lot more soldiers there than we did.

“But they turn a blind eye to our little ceremonies and local Vietnamese can’t understand why we want to celebrate what they have been told was a massive defeat.  The official version is that a small force of Vietcong wiped out an Australian division.”

Flexibility and respect are the key, says McLachlan who eplains that as soon as his party heard there might be a problem, they made alternative arrangements.  In fact, on the day they went early and were allowed to stand in silence for five minutes – “that was actually very moving for the old diggers” – and then went off to have their own service elsewhere.

McLachlan believes it’s the passage of time that draws people to former battlefields.  “Will we still be going to Gallipolli in 100 years time?  Perhaps.  But who knows, in 50 years we might be going to Iraq and Afghanistan.”

You can find out more about Mat McLachlan’s tours at battlefield.com.au.