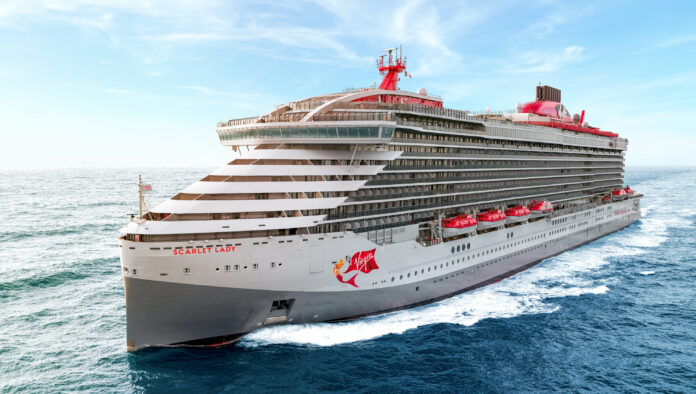 Richard Branson’s epic new cruise line, Virgin Voyages, revealed its fleet-wide partnership with international film and music superstar, entrepreneur and style icon, Jennifer Lopez. The award-winning cruise line was founded by Richard Branson, a modern-day entrepreneur with a track record for challenging the status quo. The Virgin experience is redefining the nautical tradition of appointing a godmother from a ceremonial role to a truly modern, change-making partnership with undoubtedly one of the most powerful artists in the world.

“My artistic and social mission is to empower, inspire and entertain,” says Jennifer Lopez. “Any opportunity that I get to combine all these attributes into a partnership and collaboration is exciting for me. I admire Sir Richard and all he has built. I am inspired by Virgin Voyages’ dedication to creating irresistible experiences and focus on well-being, which all fits perfectly with my own lifestyle and brand ethos.”

Looking ahead, Jennifer Lopez, Richard Branson and Virgin Voyages have big plans together. From Sailor experience development with an emphasis on well-being and fitness, to design collaborations and entertainment co-creations – all to be released throughout 2022 – she will be a fleet guardian unlike any in history. And to kick things off with style and glamor, Virgin Voyages will be exclusively introducing JLo Beauty as part of the on-board offering, bringing Jennifer’s amazing products to the high seas for the first time.

“We knew immediately that we wanted Jennifer to be a partner and to help Virgin Voyages shape the future of travel on the high seas. She is one of the most talented and hardest working people out there,” says Sir Richard Branson, Founder of Virgin Group. “I admire her as an artist, as an entrepreneur and as a person.”

“From the moment we launched this brand, we knew we wanted to make waves and bring changes for Sailors to have the most epic vacation ever. After the last two years, vacations have never been more needed, so we searched for someone very special to join us on this voyage. Jennifer is a trailblazer and embodies the spirit that lives inside of Virgin Voyages and our people,” says Tom McAlpin, CEO of Virgin Voyages.

“As an investor and advisor, she turns the godmother tradition on its head and makes it powerful and limitless. We couldn’t be more excited for what is ahead.”

The announcement of the relationship between Jennifer Lopez, Richard Branson and Virgin Voyages was unveiled on social media in a humorous video that captured Jennifer and Richard on FaceTime together. The conversation is focused on the reinvention of the godmother role by discussing what title would be right for Jennifer given she is playing such a significant role, and not just a ceremonial one, in the brand’s future plans.

Making its US debut in October 2021, Virgin Voyages burst onto the travel scene with its much-anticipated launch, turning heads by offering a fresh take on cruise travel, introducing the world to the modern romance of sailing. After just a few months in the water, the brand has received accolades from consumers and top travel sites, with the brand’s first ship being named as Cruise Critic’s “Best New Cruise Ship for 2021” and holding the most five-star reviews on TripAdvisor.

Virgin Voyages is gearing up to welcome its second and third ships in its fleet of four. Valiant Lady sets sail in March, and Resilient Lady starts her voyages in August. Virgin Voyages goes global this year with homeports in Miami, Barcelona and Athens.

For more information on Virgin Voyages, its new itineraries and its stunning fleet of Lady Ships, visit www.virginvoyages.com.