Forget the elephant, buffalo, giraffe, lion and even leopard. There’s a stunning sighting of a much rarer African species awaiting travellers on safari in Botswana at one wildlife reserve: female guides.

In an industry traditionally dominated by men, women have broken through to take all 20 guiding positions at the Chobe Game Lodge in Chobe National Park in the north east of the country.

“I think a lot of visitors are very surprised to see that we’re all women,” says head guide Vivian Diphupu, 37, who’s been working at the lodge for seven years. “You can see them look at you and hesitate as they get into the car.

“But always by the time we’ve finished the game drive, they seem very happy. I think we show them how good we are at our jobs. It’s nice to demonstrate girlpower and we’re very proud of ourselves.”

The lodge, the oldest luxury lodge in Botswana and now celebrating its 50th year since construction, started taking on more female guides when new general manager Johan Bruwer (correct) took over in 2004. He’d noticed how popular the one woman on the staff, Millie, was among tourists who’d vie to have her as their guide, would applaud her on their return from a drive and gave great feedback afterwards.

“So I looked around and found there aren’t many female guides at all in the industry,” says Johan. “I contacted the Government’s Botswana Wildlife Training institute in Maun where young people go to train as guides and asked them if they had any females.

“They said they had some now and again, but they battled to place them in the industry as companies were often reluctant to employ them. I told them to send them all to us and we’d take them on. 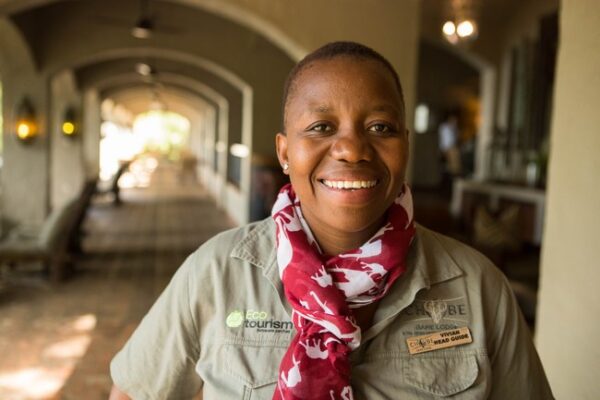 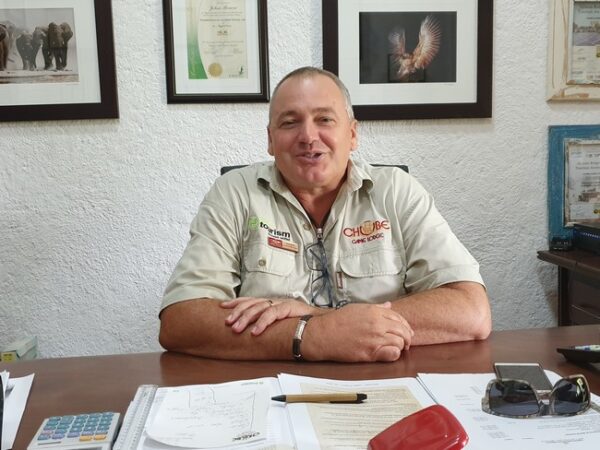 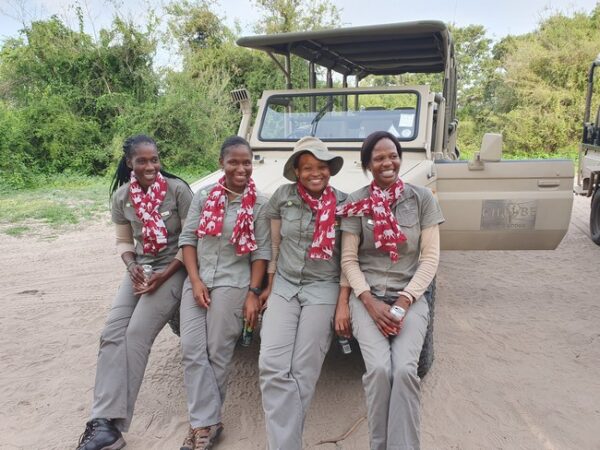 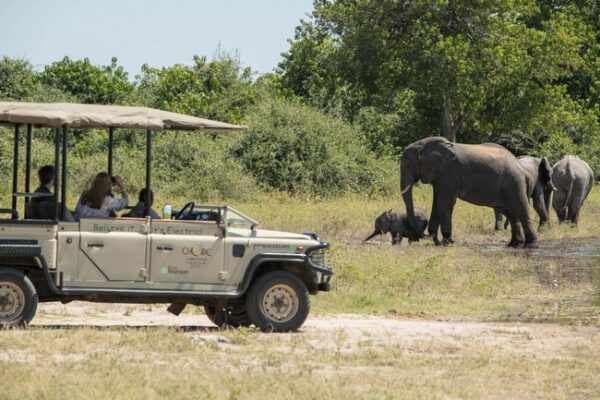 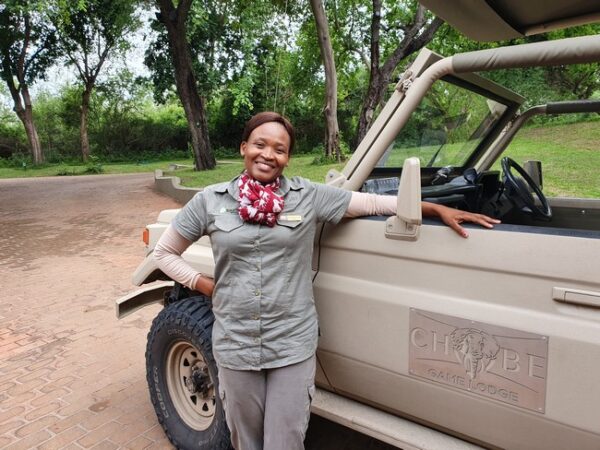 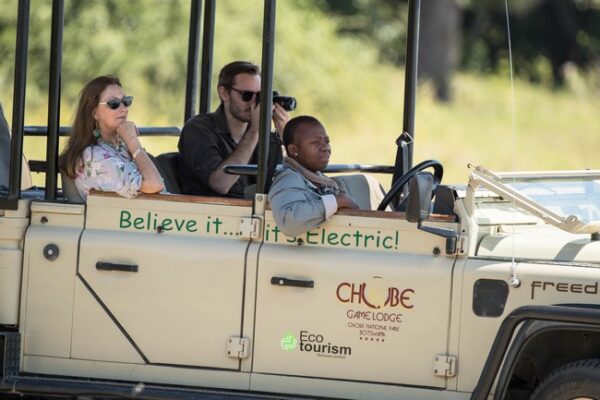 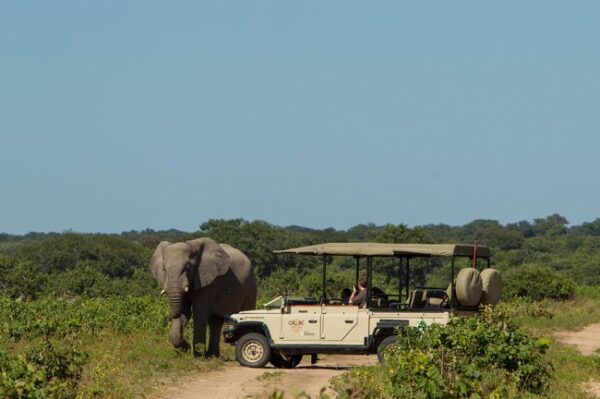 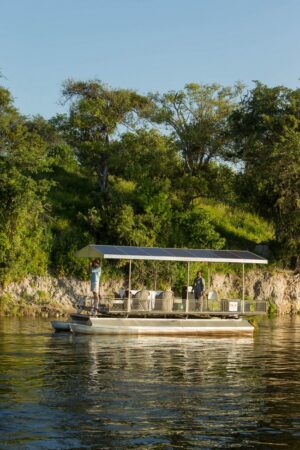 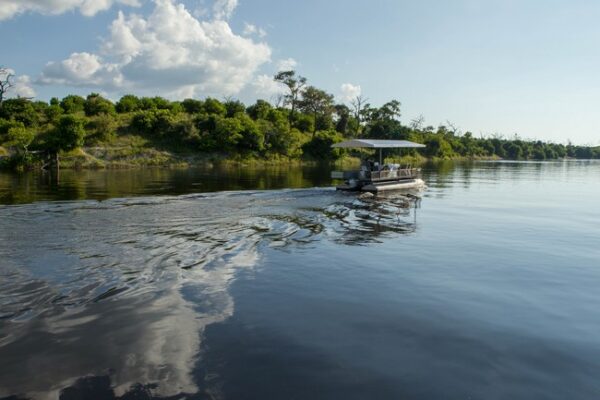 “I’ve found they make great guides as they tend to be better communicators than men, they’re faster learners as they’re so motivated and they’re gentler with the equipment.”

As a result, the number of female guides showing visitors around Chobe, Botswana’s first national park and its most biologically diverse, has now grown to 20 – the entire contingent of guides.

They drive all of the silent electric-powered safari vehicles and boats of the eco-friendly lodge, to show tourists the hippos, crocs and myriad birdlife of the Chobe River, as well as the land animals, including some of the resident 45,000 elephants, the highest density of the mammal in Africa.

Kgomotso (KG) Motsumi, 35, has been a guide at Chobe for seven years. “I love it,” she says. “It’s always different every day, and I love showing visitors our wildlife and landscapes. It’s such a rewarding occupation.”

While Millie is no longer at the lodge – she’s now living in Scotland after marrying a guest – the barriers for female guides are now steadily being broken down all over Africa. Other tourism operators throughout the continent visit to see how well the all-woman team works, and strive to mentor other female guides.

American tourist Lena Santos, 71, a retired teacher visiting Chobe as part of a pre-Azamara cruise land program, says she relished being taken out on safari by women. “It’s the most amazing thing,” she says. “I loved it. It was great too to see the men defer to their knowledge and treat them with such respect.

“And they are such great guides! You see them tracking the animals and be so patient about it and talk to us about what we’re seeing. Sometimes, you feel male guides find an animal to prove they can, but for the women it’s about showing us and sharing the enjoyment.”

As for Johan, pioneering the entry of so many women into the profession – as well as the environmental smarts – has proved exceptionally rewarding.

“We wanted to make our business sustainable and also give back to the local community when it comes to employment and employment equity,” he says. “Now women make up 57 per cent of our entire organisation.

“And we pay our female guides more because we want the best, and they’ve now become a real attraction of their own.”

Azamara cruises recently introduced its first pre- and post-cruise land program in Africa, visiting Chobe in Botswana, the Victoria Falls in Zimbabwe and South Africa’s Johannesburg for five days before its 10-night South Africa Intensive Voyage along its coast.