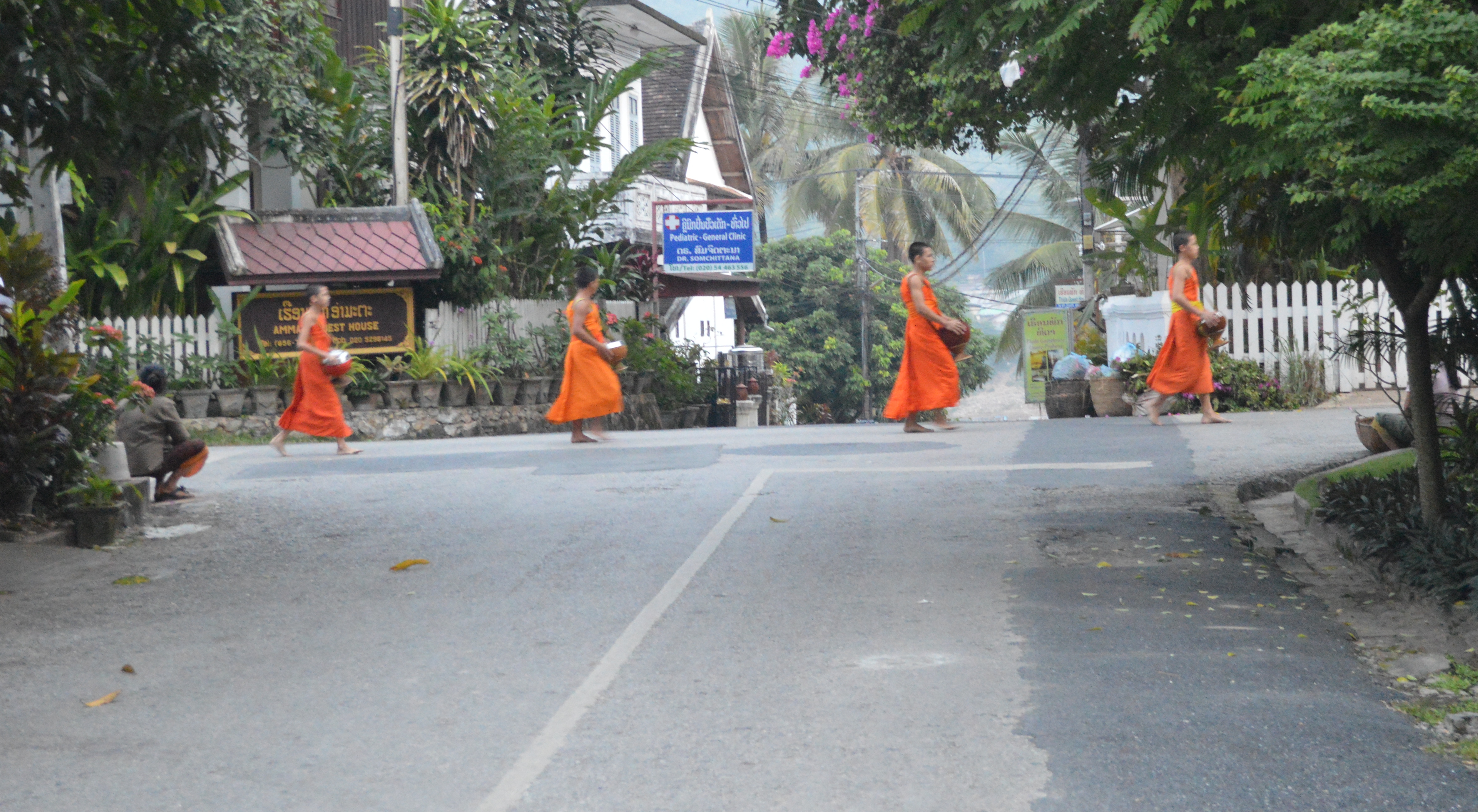 Visiting Laos is a bit like going to Vietnam 20 years ago before that country’s “Open Door” policy showed that Communist countries can extract Capitalist dollars just by offering a few decadent luxuries to overseas travellers.

Laos still relatively less developed, in terms of tourism. But the scenery between Vientiane and Luang Prabang is stunning and the people are very friendly, if a little shy.

Luang Prabang is a city of about 50,000 people in North Central Laos where the Nam Kahn river joins the Mekong. It has dozens of monasteries but still retains a considerable French influence in both its architecture and cuisine.

There are excellent restaurants but the local food tends to be a little blander than either of its neighbours, Thailand and Vietnam. There are very lively night and day markets, cafes and spas, but not much of a night life per se.

As far as restaurants go, you’re spoiled for choice but the Ock Pop Tok Silk Road Café just outside town on the river gets rave reviews and the Tamnak Lao restaurant, set in a fine old French Colonial former residence is also a cooking school

The Free The Bears sanctuary, set up by Perth woman Mary Huton,  is just outside Luang Prabang and you can read about my visit HERE. It is very close to the fabulous Kuang Si Waterfall where you can cool off with a swim in its pools.

Vang Vieng is a backpacker haven where until recently they were averaging about 10 tourist deaths a year a year because of “tubing” – tourists ride car tyre inner tubes down the river and grab ropes thrown  from riverside bars where they are serve “whiskey” literally by the bucket.  Tourists get drunker as they proceed down the river which once had 40 bars but now only has four after a government crackdown.  The riverside restaurants encourage tourist to lie down while they eat and drink (as they’ll probably end up doing that anyway) and they show episodes of Friends and The Simpsons on endless loops.

The capital Vientiane is well-ordered and relatively quiet compared to other S.E. Asian cities.  It has the fabulous Pha That Luang temple or “Great Stupa” which is one of Laos’ best known landmarks. About an hour outside of town is the strange Buddha Park which was built over several years by a self-styled “holy man”.  On the way you can see factories turning out very colourful spirit houses and animal statues for garden ornaments.

Restaurants there include the Kualao Restaurant which is in a former French colonial villa (and where Paul and Anita Keating dined when they were there to open the Mekong River bridge to Thailand).  It has traditional dancing and is a bit touristy (but some people like that).

As a complete contrast, you could go to the Vangthong Evening Food Market where you can work on the principle that if you can see it being cooked, it’s probably OK. And there’s the Makphet training restaurant which trains streetkids and serves delicious Lao food.

In the evening, go down to the Mekong shore where there a free open-air evening “pump” class for literally hudreds of people, led by two or three instructors at a time.  There’s al;so a clothes market nearby which has a few food stalls too.

A week in Laos

If I had a week in Laos I would spend a couple of days in Vientiane, then travel via Vang Vieng to Luang Prabang which is only 300 km away.  On the way I’d check out the working salt mines at Ban Keun, and Tha Heua, a small village that specializes in dried fish, which you will see hanging in front of the houses.

Vang Vieng isn’t all drunken louts there’s the beautiful Tham Jang cave that makes it worth breaking the journey there and the town has some great views of the Nam Song River and the valley.

You could spend a night there and then drive on to Luang Prabang, possibly stopping at at Koe Kuang local forest market, offering edible snakes, rats and assorted reptiles!  There’s another market at Phou Khoun and a couple of very picturesque villages along the way.

In Luang Prabang, as well as the temples and royal palace, there are lots of cafes and restaurants – the former royal chefs have left an influence here – and you can cruise upstream on the Mekong River, to Pak Ou, two caves set in a limestone cliff facing the river crammed with thousands and thousands Buddha statues of various shapes and sizes.

But beware, there are lots and lots of steps.  If I had more than a week, I would just chill out for a few days in Luang Prabang and kid myself I was writing a novel.

The area between Vientiane and Luan Prabang is very mountainous – the geological formations are Karsts (the dome-like mountains you see rising out of the water in Halong Bay – only without the water) which means there are also a lot of caves.

Companies like Tiger Trails do trekking, kayaking and cycling holidays (with optional elephants).  Community Trekking is a kind of ecotourism where you walk with a guide to a variety of villages, often in national parks, where the villagers are trained in basic hospitality. If you like walking and meeting people from different cultures, this is for you.

As part of the trek you can stay with families in a village homestay which is pretty basic. Your accommodation probably won’t have electricity but you will have a western style outdoor toilet.  Washing may be in the river.

Is Laos a cheap holiday?

How to get there?

I flew from Sydney to Vietnam and then to Vientiane on Vietnam Airlines and had a small group tour in a minibus which I would highly recommend (through TravelIndochina who are not the cheapest but they are very reliable and experienced). We flew from Luang Prabang to Hanoi and then home.

Settha Palace Hotel www.setthapalace.com (From about $250 a night)

Family Hotel www.family-hotel-vientiane.com (from about $37 a night)

Three Nagas www.3-nagas.com  (From $290 pn. Not the poshest hotel in Luang Prabang but a very stylish boutique hotel in old French area, with a great restaurant  and monks come right past the front door).  Warning – they have free wi-fi but a “no TV” policy

Villa Chitdara www.villachitdara.com – in the same area for about $63 pn.

Cuba gets ready to rock as Obama and the Stones roll...