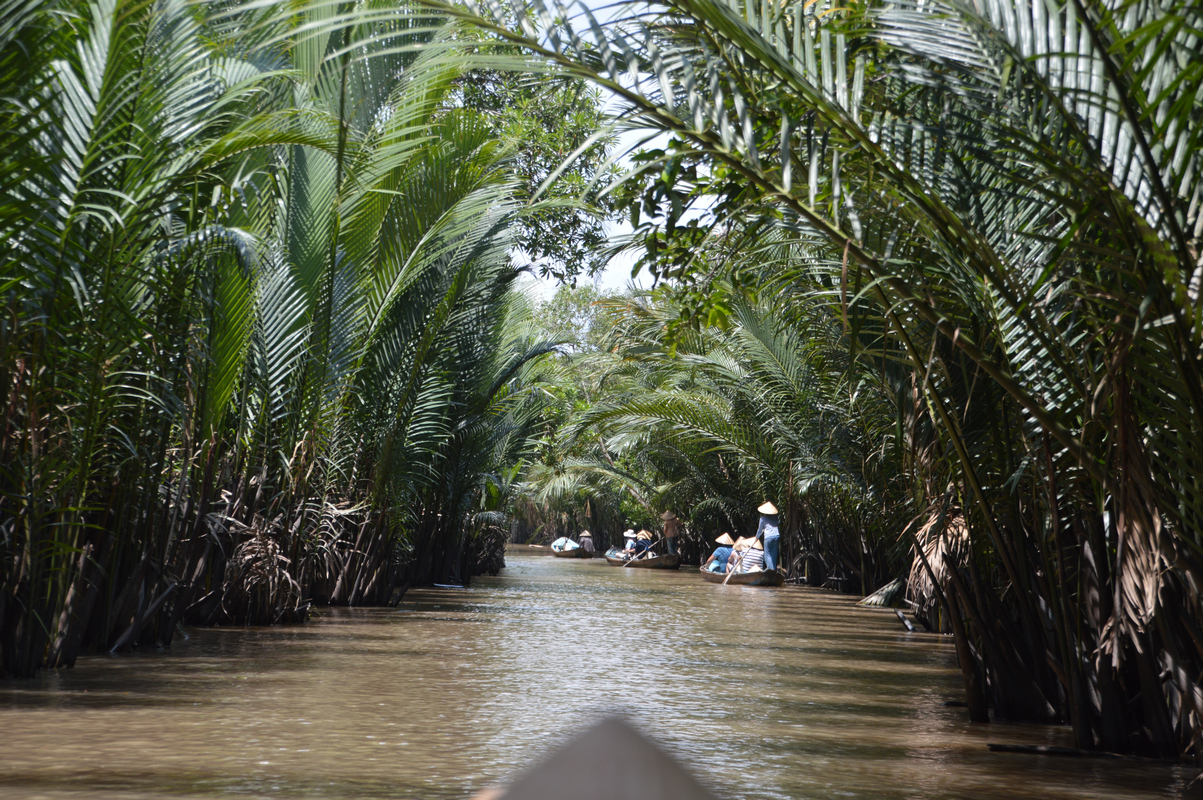 “Stop the bus!” The only time you usually get to say that on an organised tour is at a time of disaster: Someone’s been left behind, last night’s dinner turns out to have been as suspicious as it was delicious, or you’re on the wrong bus completely. Unless, of course, you are running the tour.

It was the first full day of my new role as a tour guide and we were trundling through the small town of Long Phuoc, between Ho Chi Minh City and Vung Tau in Vietnam when, out of the corner of my eye, I noticed a statue (pictured right).

Not just any statue – Vietnam is littered with them – I had seen a picture of this one in a newsletter from a Vietnam Vets’ organisation.  I was keen to make a good impression on the 10 people I had persuaded to join my inaugural Tunnel Rats book tour (with co-author Sandy MacGregor), so I made my charabanc stopping call.

“This is Duong Van Manh,” I said authoritatively to everyone gathered around the statue.   That’s what it said on the statue and I assumed it didn’t mean “keep off the grass”.  I related the story, cribbed from the newsletter, of how Manh became a hero of the Vietnam war by working out how to steal and recycle anti-personnel mines for use against Allied troops.

“He then travelled all around Phuoc Tuy province and taught villagers and other Vietcong,” I said, gesturing authoritatively to the statue.  “The result was devastating for Australian troops who suffered more casualties from their own landmines than from any other single source.”

Standing in the grounds of a small temple in the morning heat, my small, captive audience seemed rapt.  Australian troops suffered almost as many casualties from American “Jumping Jack” mines as they did from Vietcong bullets. It was the first morning of the tour and they were already learning stuff they’d never heard before.

It was all going tremendously well until Tam, our official tour guide, sidled up to me.  He and the local guide Trang had been deep in conversation throughout my impromptu presentation. “Is wrong hero,” he said with a shy, apologetic smile. “This hero fought in French war, not American war.” Trang nodded her confirmation.

The statue was definitely the one in the newsletter – that much I got right – and there was a hero who worked out how to recycle land mines. But the person in the story wasn’t the one on the plinth. I ushered everyone back on the bus, my newly-minted reputation as an ace tour guide already in tatters.

Having avoided organised tours for most of my travelling life, running one didn’t come naturally to me.  But Sandy and I’d had our Tunnel Rats book published the previous year and that September I went to Vietnam to see the places where Australian Army Engineers had been stationed. That’s when it occurred to me that this might make the basis for an organised but informal tour.

As a young captain back in 1965, Sandy had led the original Tunnel Rats who were the first to explore the Vietcong tunnel systems, and I knew he could tell the stories that didn’t get into the book.  I would look after the day-to-day stuff and talk a bit about modern Vietnam, the writing process, and anything else to while away the journeys between the various Tunnel Rat locations.

We contacted a tour company and they worked out the logistics for us so we didn’t have to look after the money; when it comes to being a debt collector, life’s too short and so am I.  We set a minimum of 10 paying guests and a maximum of 16 and gave ourselves four months until the middle of January to round them up.

We made our ten and they were quite a mixture: two twentysomethings who’d never been out of Australia, their Dad, a Digger making his first trip to Vietnam, a couple in their 60s whose friends and family had begged them not to take such an arduous trip, two keen hiking mates, a military historian and an old friend of Sandy’s – an intrepid septuagenarian who took the daily adventure in her stride.

Despite my misidentification of the wrong hero from the wrong war, by day two things were going surprisingly well. We were seeing even more than we had planned, including Vietcong caves that we hadn’t realised we’d be able to explore and an amazing military museum in Vung Tau created by a millionaire expat Brit, displaying weapons and uniforms that went back 1000 years.

We tried to stay away from tourist restaurants, much to Tam’s irritation, and my “naughty but nice” tour of Saigon’s nightlife erred on the ‘nice’ side, including encounters with ballroom dancers in the park and chatty locals who simply wanted to practise their English.

Thankfully, rather than being alarmed by our ‘informal’ approach to schedules, everybody seemed excited by the sense of adventure.

On my solo journeys, or travels with a friend, I have often remarked that there are a lot worse things that can happen than being lost in a strange city.  This is where you find the the hidden gems that regular tours can’t include as well as the people who are not jaded by the daily parade of overseas visitors chanting the local variation of the “No souvenirs, thanks” mantra.

But a group of tourists is an organic beast that is already out of it’s comfort zone and it instinctively seeks safety and security as much as it wants excitement, entertainment and edification.

So we gently nudge, encourage and explore.  And, in the spirit of the Tunnel Rats, occasionally discover something entirely unexpected and amazing.

Tunnel Rats and its sequel A Sappers War are  published by Allen & Unwin and are available in print and as ebooks from a variety on online sources.

Visit 20 places on the Med, unpack only once

Luxury Qantas charter drops in on near neighbours