Vietnam caves get under your skin

I seem to have a thing about going underground in Vietnam.  If it’s not the Vietcong tunnels at Cu Chi it’s the escape tunnel from the Reunification (formerly Presidential) Palace in Ho Chi Minh City (Saigon).

I even get a thrill going through the new road tunnel under the Saigon River, wondering if there was much slapping of foreheads when the city planners realized the answer to their future traffic needs lay in their recent past.

But these are all man-made holes in the ground and even with their military significance or civil engineering prowess, they don’t come close to subterranean wonders of the caves in Phong Nha-Ke Bang National Park.

This UNESCO World Heritage Site, about 60 km northwest of Dong Hoi city is where you’ll find the Paradise Caves. Near the west branch of Ho Chi Minh Highway in Quang Binh Province, this is where Vietnam is at its narrowest and it’s only a couple of hours driving from the coast to the Laos border.

At 31 km long, the Paradise Caves or Dong Thien Duong, to give them their proper name, forms the longest cavern system in Asia.  Until recently they were also one of the most ancient secrets on the planet – having only been discovered in 2005 by a local man.

An exploration by the British Cave Research Association shortly thereafter revealed that the  largest cave in the chain reaches up to 100 m high and 150 m wide. Seven years later, with a lot of thought and investment poured into the project, Paradise Caves are eminently accessible if you are reasonably mobile.

After an easy drive into the mountains along good and remarkably traffic-free roads, you switch to electric carts that whisk you up the last steep incline to the cave’s entrance. Then it gets serious with a fairly strenuous climb of more than 500 steps to the narrow entrance in the side of the mountain.  It’s no walk in the park but, even as 100 wooden steps down to the cave floor mock your aching knees, standing at the top is an out-of-body experience.

If the climb hasn’t taken your breath away, the sight before you will; you are closer to the roof than the floor of the caves and the dim lighting is just enough to let you see the massive extent of this underground wonderland. The cave is huge – bigger even than any imagined Hollywood confection – and it’s beautiful.

As you descend to the wide and sturdy boardwalk (mostly) tasteful lighting reveals massive, mind-boggling rock formations that are the physical manifestation of time standing still.  Some of these massive stalagmites look more like ancient religious statues, mounds of yawning skulls, or the gaping maws of spellbound dragons.

The 1km timber walkway winding through these astonishing rock formations take you to a viewing platform from which the caves seem to go on forever.  The 120,000 Dong entry fee (that’s about $6) includes a guide with ‘Madonna’ microphone and little speakers attached to his or her belt so there’s a multicultural smorgasbord of languages as you pass tour groups, each listening to descriptions in their own tongue.

Even so, this is an incredibly peaceful place and you can always find a corner for some quiet contemplation, something the size and beauty of your surroundings naturally inspire.

Amazingly, Paradise Caves aren’t even the largest in the area. Nearby Son Doong, or Mountain River Cave, is now recognised as the largest cave in the world at more than 200m wide and 150m high and almost 10 km long, making it twice as big as Deer Cave in Malaysia, the previous title-holder.

If caves are your thing, there are believed to be between 150 and 300 in the area although only a couple are open to tourists.  Keen cavers can take a three-day tour from Dong Hoi including two nights camping and six hours cave exploration with local guides, porters and forest rangers. A two-day tour can also be arranged with one night camping but only three hours in Son Doong.

A much more leisurely expedition is to the Phong Nha Cave where you go for about 1500m along its underground river on little boats that take ten tourists at a time.

There are tours to the caves from Hue and even Hanoi but the closest  base for your adventures is the seaside town of Dong Hoi with its spectacular beaches and classy Sun Spa resort, a genuine five-star  hotel right on the beach.

As in just about every half-decent hotel in Vietnam, the Sun Spa has free and reliable wi-fi in the rooms which are spacious, clean and comfortable and the flaws are quirky rather than catastrophic (the bath didn’t quite reach the wall so every shower was a flood).

It has several eateries serving Western dishes (if you must) as well as authentic Vietnamese food or you can hire a bike and cycle ten minutes into town where there’s a lively market and a riverside beer garden selling freshly grilled squid.

But it’s the caves that are the big attraction – in fact, they don’t come any bigger.

Vietnam airlines fly daily direct to Ho Chi Minh City from both Sydney and Melbourne for around $1500 return.  Travellers can also get a “half-and-half” deal allowing you to fly to Vietnam economy but return (overnight) in Business Class, from $2,000.00 plus taxes (about $430.00 but variable) to $2,225.00 plus taxes, high season. Internal flights can be added for $50 per leg. Australians require a visa available online from vietnamembassy.org.au. Vietnam Airlines flies four times a week between Ho Chi Minh City and Dong Hoi.

Rooms with breakfast at the Sun Spa in Dong Hoi range from 2.25m Dong per night (about $105) up to 48m Dong ($2250) for a three-bedroom villa.  However there are special offers on the hotel’s website sunsparesortvietnam.com.  Next best hotel in Dong Hoi is the Saigon-Quang Binh, in town on the riverside, where discounted rooms range from $69-$81 B&B.

You can organize an all-inclusive Paradise Caves tour from the Sun Spa hotel for $2.23 million Dong (approx. $104) per person, or add in Phong Nah caves for an extra $20 or so. There are budget tours from Hanoi including an overnight bus trip from under $50 and one-day tours by bus available from Hue.

One thought on “Vietnam caves get under your skin” 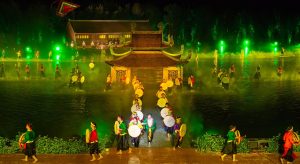 There are plenty of cheap-as-chips tours of Vietnam on offer at the moment but if you want something with a little luxury, allied to romance and intrigue, Jimmy Thomson is putting together another small-group tour of his favourite country in South-East Asia. Jimmy has written three books set in Vietnam so not only will you […] 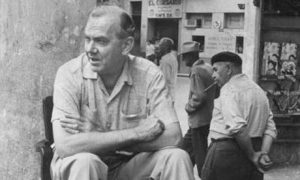 [huge_it_slider id=”4″] Vietnam has plenty of attractions, writes Jimmy Thomson, but when you travel with The Quiet American by Graham Greene in your pocket, and Indochine on your laptop, a whole new world opens up to you. There’s something magical about travelling to the locations of your favorite works of fiction. It’s not as if […] 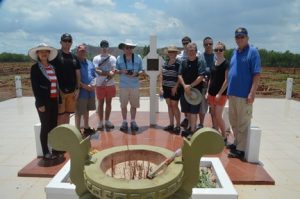 [huge_it_slider id=”5″] With Vietnam increasing in popularity for all sorts of tours, including the recent, chaotic 50th anniversary of the battle of Long Tan, Tunnel Rats author Jimmy Thomson recalls how his first tour as a guide began with less than military precision. I was standing in the courtyard of a small temple in Long Phuoc, […]