Walking in Portugal: Day 8 – Aljezur to Arrifana (or not) 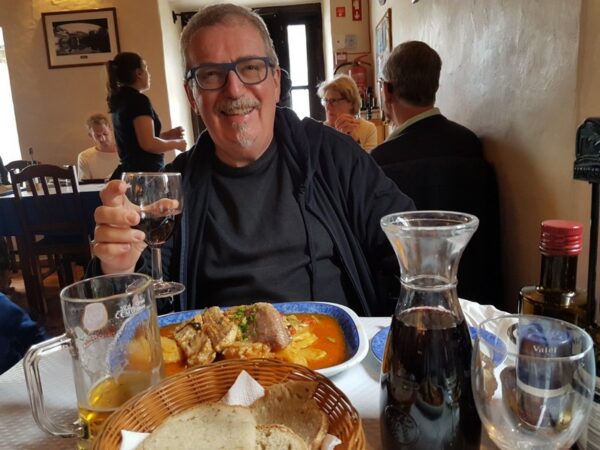 The day started with an interesting breakfast during which Kieran almost projectile vomited on to an American girl who took off her shoes and socks at the table and starting picking bits of dead skin from between her toes. Her friends vacated abruptly, leaving us alone with her feet.

Kieran went off to do the one-way hike to Aljezur beach (I’ll explain “one way” later), leaving me, pleading injury and exhaustion,  to write my column for the Australian Financial Review, do my newsletter for my apartment living website (flat-chat.com.au, if you must know) and contemplate what I had learned from this trip.

Here, in no particular order, are some thoughts.

I mention the last item because I had forgotten to report our trip to the Farmacia in Milfontes, or indeed the streaming cold I had on the first day.  My nose started running from the moment we left the hotel and kept going all day.  Thankfully I bought two multipacks of tissues in Porto Covo (and used every one of them).

That night, back in Milfontes, we ventured out and found the weirdest pharmacy ever.  There were few items on display and it turned out what you had to do was ask the pharmacist for what you wanted, he consulted some sort of catalogue hidden under the desk and from that he got a reference number for a stack of labelled drawers that covered a whole wall.  Inside each drawer was one bottle or packet of the medication you required.

It was so strange and controlled, it felt more like pre-unification East Germany than 21st Century western Iberia. So it was a shock a couple of days later when we walked into the welcoming retail chemist in  Zambujiera and discovered it was exactly what you’d find back home … including no end of products on display, advertising cards and a sense of humour.

Kieran returned from the one-way walk to Arrifana Beach which is 18km distant; too far for a round trip on foot so once you get there, and once you’ve topped up on pastel de nata and coffee, you call Ricardo and he sends a taxi.

It turned out my instincts had been right;  1 km from the start there’s a climb of 130m over just half a kilometre if that, followed by a 60 metre descent and ascent through a gully.  Kieran said that he reckoned he’d have been carrying me up one of the hills, especially through the soft sand.  Maybe he was just trying to make me feel better for piking on the last day.

For the record, as well as writing, I explored the supermercado next door and discovered that not only did it sell decent coffee, I even had a tasty salt cod rice type thing for lunch (and a Portuguese tart, of course). I also had a glorious bath … a rare luxury in modern hotels.

That night we walked back into the old town and had an excellent meal of fish stew in the recommended O Pont’a Pe restaurant.  A great little place with terrific service and excellent food.  It was a good way to finish our trip.

Tomorrow, it’s back to Lisbon. My only regret for this part of the holiday is that, as much as I enjoyed the hike – and I did – I would have got more out of it if I had been better prepared.