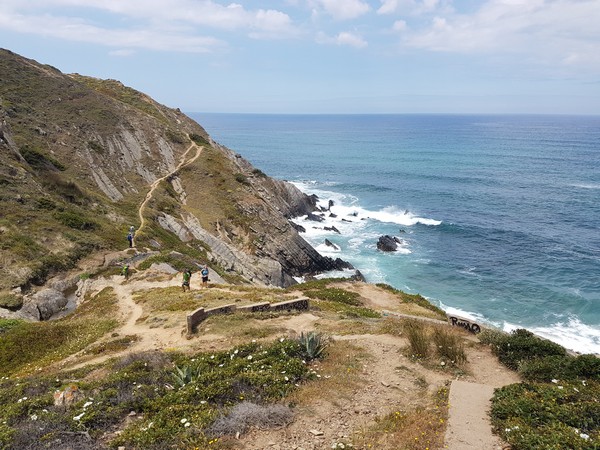 First, a word about feet. Before I set off for Portugal, my wonderful wife who tries to look after me, insisted I get a haircut.  She might have done better to suggest a pedicure.  It all began with the second toe on my right foot, the nail of which was too long. So the first discomfort, after the initial 20km walk, was created by the nail jamming back into the toe.

By the time a cure had arrived in the form of a pair of nail clippers, I had completed another 20 km, unconsciously adjusting my foot position to protect the injured toe and in so doing, wearing a sizable hole in my right heel. By the time I had acquired protection for my heel, I had adjusted my foot position again and created a substantial crater in the pad behind the big toe. I know this domino effect to be true because my left foot remained uninjured throughout the trip.

So, if you are thinking of going hiking, my advice is not to go to the hairdresser until you have visited the chiropodist. My right foot was a disaster. My hair could have been down to my waist and not troubled me. 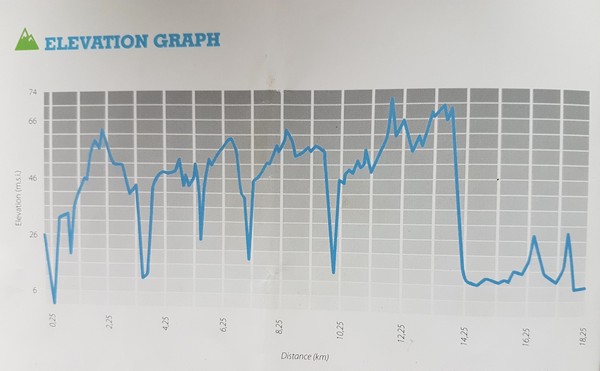 The trip to Odeceixe – pronounced by locals (but rarely by us) Ode-Sesh – was just as challenging as the elevation graph suggested it would be. Let’s just say we could have done with a few more data drops and considerably fewer rock scrambles and death-defying descents. To be fair, the first stretch was OK but we managed to miss a turning in the first 10 minutes. However, we’d only walked about 200 metres before being redirected by a friendly taxi driver (who I tried to brush off, thinking he was touting for fares). Our excuse was that we were distracted by the bison and ostriches in an enclosure by the road (honest!).

This being a Saturday, the trail was almost crowded, mostly by middle-aged couples with frowns of concentration that would have put the elevation graph to shame. Whenever we caught up, as we frequently did due them doing stupid stuff, such as looking at the scenery and taking pictures, they would scuttle off ahead of us like insects who didn’t want to lose their remaining limbs, having been previously partially dismembered by small boys. They also looked like insects because they were pretty soon at a considerable distance, breasting the crest of ridges with the smug self-assurance that only walking poles and $300 anoraks can give.

We were promised a café at Azenha Do Mar but warned that it tended to get crowded at weekends, and so it turned out. A huge tourist group was taking up most of the seats – guarding the empty ones ferociously for people who might, maybe, perhaps want them. 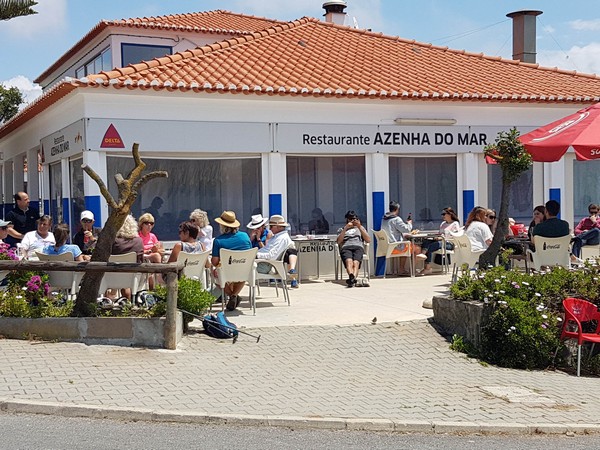 I fixed one gent with a look that said, as best a glare could,  “you came in a bus – you haven’t trudged through 10km of  rough tracks, up and down massive dunes of soft sand and got lost looking at ostriches, have you?”  With a snort of guilt masquerading as contempt, the precious red plastic chair was relinquished.  A small victory for the Walking Half-dead.

Two coffees and a nut bar later, we trudge on, immediately confronted by a suicidal descent to a rocky stream followed by a perilous, slippery climb up a near-vertical grass, sand and shale cliff.  OK, to be fair, the descent had been managed without fatalities by a group of teenage women, some in platform-soled sandals and most shod by nothing more substantial than Sketchers.  This was clearly where Ricardo had received his advice on footware. 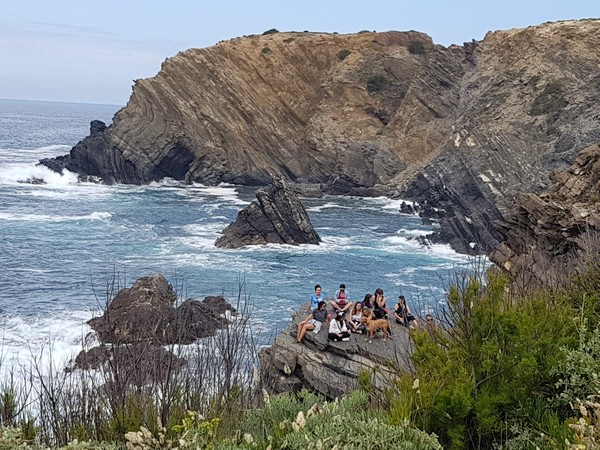 Then there were the two women with their 40-something mother who seemed to be able to climb and talk without taking a breath, while I wheezed asthmatically from gully to peak and gully again thinking (as she explained in detail what was wrong with her new bathroom) that at least if I fell and broke something important, a helicopter might be involved.

Ironically, the hardest part of the hike was absolutely flat. First there was the false promise of the Praia De Odeceixe (Odeceixe Beach) which we only belatedly realised was on the wrong side of the river and a long way out of the town proper. Then the last three kilometres were on a bitumen road that snaked along the side of a swamp with the town of  Odeceixe appearing and disappearing and not seeming to get that much closer.

Actually, the worst part of this leg was getting to the town and discovering that we still had the highest climb of the day to complete just to get to our lodgings.  Not only that, if we wanted to watch the Champions League Final in a bar or restaurant (which we did), we would have to climb the hill, check in, climb back down and then climb back up again when it was all over.

Fortunately, the final climb was well worth it. The Casas Do Moihino  (or Windmill Houses) are very cute little workers’ cottages turned into very stylish apartments.  It has to be said, however, that we did start to wonder where all the residents of the various villages we stayed in had gone, with most of the houses and apartments shuttered for the season.  Had they been airbnb’d to go and live like the locals … in much less attractive localities?

I’m splitting hairs.  We settled in, showered and eventually set off down to a restaurant that we were assured would have a giant screen playing the Final.  In fact, it had a relatively small screen playing the match with the sound dialled down.  Almost as entertaining was watching the bloke at the next table trying to pretend he wasn’t watching the football, every time his girlfriend looked at him meaningfully.

Back up the hill we went, feeling no pain.  I had checked the itinerary and consoled myself that at least the next leg started with a climb up the very hill on top of which we would be sleeping.  It would be an easy start to our final destination and a sure sign it would be smooth sailing for the last two days.

Ha! In fact, it sparked the worst spat we had all trip, which resulted in me refusing to take another step forward.