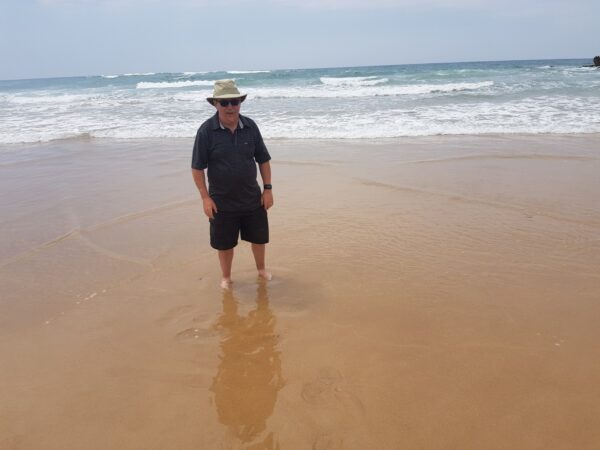 “I am not walking down that f#$%^&g hill just to f#$%^&g walk back up again.”  I can’t recall if those were the precise words I used but the general gist is spot on.

Kieran and I had emerged from an excellent breakfast in the Windmill Cottages HQ and had set off full of confidence along the only possible route out of town, as described in our brochure, only to promptly run out of route markers.

Kieran suggested we walk back into to town, find the start of the markers and walk back again.  Since this was the highest hill on the previous day’s hike and we had already climbed it twice yesterday – that there was the promise of a flat track for most of the way to Aljezur,  I was having none of it.

We were already at the top of the damned hill. The instructions said to go past the windmill.  We could see the windmill and all routes from it converged on the roundabout where we were now standing, according to both the map in the brochure and one on a nearby bus stop.

“You go back down the bloody hill,” I said.  “I’ll wait here because that’s where you’re going to end up anyway.”

The ensuing silence was broken only by the embarrassed cough of a local waiting for a bus. He could tell we were arguing – he just had no idea what about.

I hobbled off down the only exit road from the roundabout that we hadn’t tried and … oh, my good God … there was a little wooden post with the two stripes on it. We were on our way.

Now, even including the hill that I refused to climb, this was going to be the easiest walk of the whole trip … in theory.  The start was several km alongside irrigation canals, so by definition the route was flat along a plateau between the ocean and the mountains.

A slight detour round a cyclist who had gone too fast and ended up in the shallow canal, and was now drying himself off and changing his clothes, was the only deviation from the path. Sooner than we expected, we arrived at the village of Orgil where we continued our quest to identify the best Portuguese custard tarts (or pastel de nata)  in the world, washed down by some pretty damn fine coffee.

The guide leaflet recommended the sweet potatoes that are the specialty of the Museu de Batata Doce (as they should be since the translation of the café’s name is “Home of the sweet potato”).  But we were on a mission and custard tarts were our only acceptable option.

It has to be said that the heat from my dummy spit had evaporated as soon as we spotted that little marker post and our only debate as we flew along the track occurred when we hit the marker post that invited us to take a detour via Amoreira beach.

Having earlier eschewed the route past Odeceixe Beach – we’d seen it the day before, albeit from the other side of the river – we couldn’t pass this one up. On the other hand, if we went straight on we’d take 5 km out of a 22 km hike.  We took the detour. 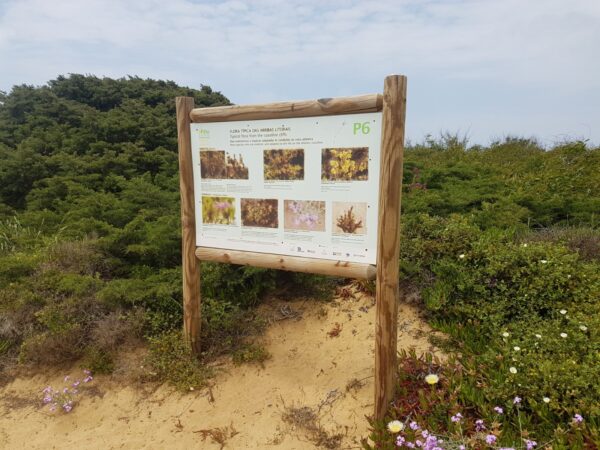 We hadn’t gone more than a kilometre before we were back into soft sand and undulating dunes again.  I could have wept. The compensation was fields of wild flowers which, had I been more of a botanist and less of a pessimist, I would have enjoyed immensely.

About halfway along, we descended fairly rapidly to Amoreira which looked like a popular holiday spot and even had a beach café and a surf shack offering massages. I bathed my shredded foot in the chilly Atlantic and rewarded myself with a Magnum bar (which looks like the ice cream disguised as a Snicker).

On we plodded and pretty soon we were trudging back up a series of hills to the plateau we had so cavalierly left behind us. The extra five Ks were taking their toll on me now and neither the ocean nor the ice cream had been enough to compensate.

We reached the town square in Aljezur, an impossibly pretty town that tumbles down a hill from an ancient castle to a river, and we were lost again.  Kieran thought we should climb further up the hill to a church – I swear that man is half goat.

Instead we asked for directions and discovered we only needed to walk a little further and we be back on track.  Our hotel, the Vicentina, was the real thing, with a bar and restaurant.  It sat next to a supermarket looking down on to a busy road but it felt like heaven to me, not least because we’d get to stay two nights in the one spot.

That night we dined in the hotel restaurant, which was OK, as hotel restaurants go. That’s when I dropped my bombshell: given that we were going to be spending two nights in Aljezur, my right foot was in tatters and my left was feeling the strain of compensating, I was declaring myself unfit and I would skip the final day’s hike.

Kieran was contemplating quitting too – or at least he said he was – but I knew that after a good night’s rest, he’d be off looking for new hills to conquer.