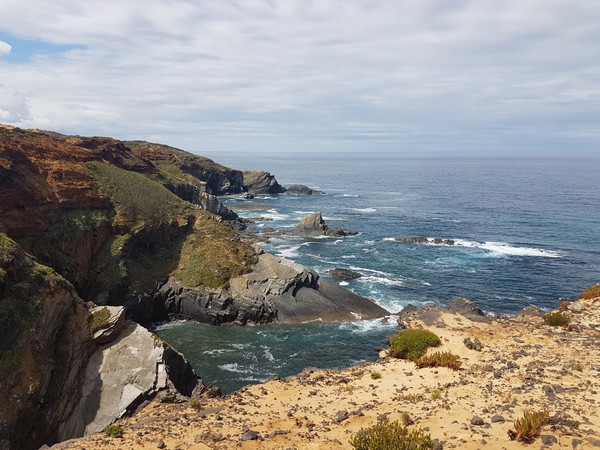 A word about breakfasts: there’s a lot of bread.  In most of the B&Bs and small hotels where we stayed along the route, breakfast was simple but sufficient.  Fresh orange juice and drinkable coffee were a given.  Fresh fruit – either peeled and chopped or available intact in a large bowl was often on offer. In some places there was egg and even bacon and sausage.  Cold meat and cheese were de rigeur, in the continental style and some places even had muffins and pain chocolat.  In other words, unless you were a lactose, glucose, fructose and gluten intolerant vegan, you would find plenty to eat.

However, it seems the Portuguese – at least, those in Alentejo – have not yet mastered the art of scrambled egg which tends to be overcooked into hard lumps with the excess liquid drained off. It’s a small complaint, but if you’re hoping for a hot breakfast, be ready to be disappointed.

On the other hand, our motel – Monte Nova Da Longueira – had the best eggs of the trip, presented simply in a glass bowl.  Top marks for trying! 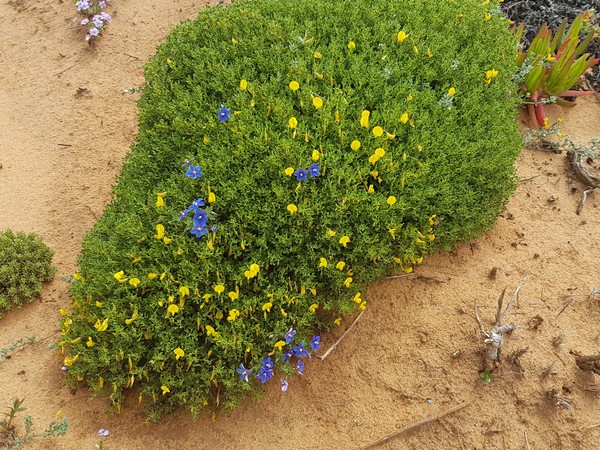 The walk from Longueira/Almograve began with a steady climb through more bloody sand dunes, culminating in a detour through a forest to avoid some seriously eroded tracks. The forest meant more opportunities for wrong turnings which we duly took. [Readers suffering déjà vu should know that I accidentally put this in the previous day’s blog – another wrong turning] We went round in 2.5 km of circles and dead ends (according to my GPS watch) before we lucked into the trail again then found a promised café at Cavaleiros. 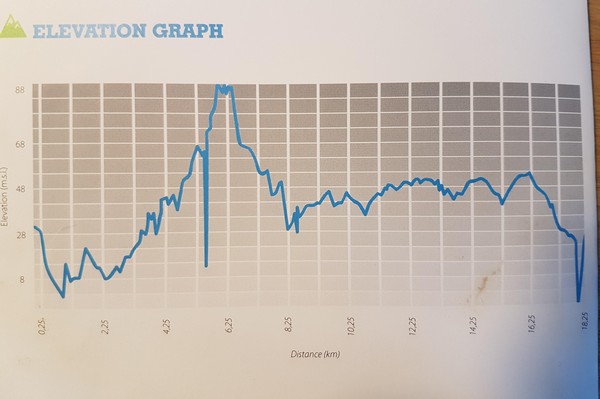 The daily guides include an “Elevation Graph” showing the ups and downs of the route. On this part of the trail, at about 5km there is a sharp drop of about 60 metres followed by a sharp climb of about 80.  The American academics we met the other day said this might just be a “data drop”, when the recording equipment or sports watch or whatever just stopped then started again. We had to admire their optimism, however misplaced it turned out to be, as we scrambled down one side of a rocky gully and up the other. 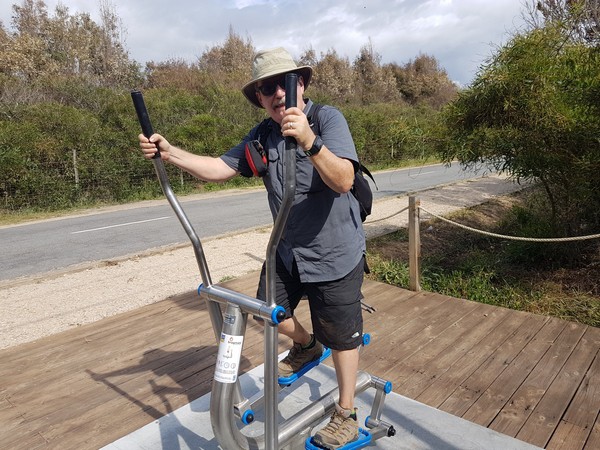 Along the last, long, straight, made road into Zambujeiro do Mar, there were exercise stations along the way. Kieran thought ith would be hilarious to take a picture to show I wasn’t as close to death’s door as I felt.

When we got to town, we stopped in at a farmacia where the chemist thought it would be hilarious to tell us our hotel was a further 5km down the road (it was around the corner).  I found myself saying, in a fake Iberian accent, “I will kill you with my bare hands and steal your car.” Fortunately, few people joke with him in English so he found this hilarious (rather than calling the police).

Armed with Compeed plasters for my now shredding right foot we discovered that the address for our hotel  – the Ondazul – turned out to be a private house half a block from where we were supposed to be.  But that was OK – when we called the owner he just walked out on to the street and waved.

The rooms were clean and comfortable, and we crossed the road and had a beer with a British couple who complained about the grafitti in Lisbon. How bad could it be? I have been to Yorkshire – they know their way around a spray can there too.

Dinner was in one of a dozen restaurants in a newer part of the town, overlooking the beach. As we staggered back up the hill to the hotel, there was a niggling thought tugging at the pit of my stomach – the “Elevation Graph” for the next day looked like the read-out on a heart patient’s monitor.

Production note: As an experiment, I have gone with pictures in the text, rather than in a slide show – let me know what you think on mail@mildrover.com or Facebook.