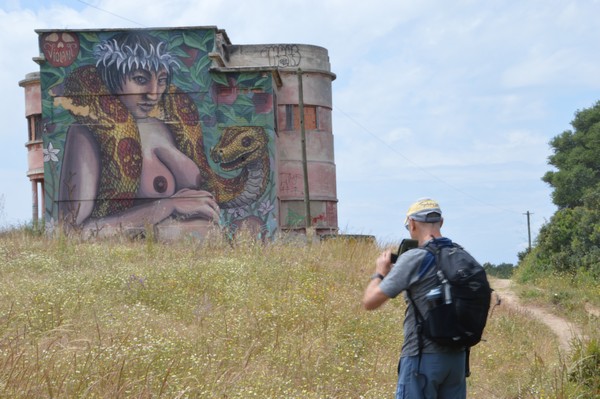 Yesterday, I neglected to note the sad passing of a pair of reliable friends.  One of Kieran’s sturdy walking boots gave up the ghost about 5km out of Milfontes, its flapping sole sucking up sand like a dredger with every step.  Held together with elastic bands until we got back to base, into the bin it went, along with its still fully functioning companion, who would just have been lonely without its right-hand (or foot) man. There’s no room for sentiment on the Rota Vicentina.

You have two choices when you leave Milfontes and head south: take the wee ferry and save 2.5 km of the round trip over the bridge. Having conquered the “hardest part” the day before, we took the latter option.  We are hiking fools.

All you have to do is follow the signs, small blue and green stripes and/or arrows on wooden posts, power poles, trees or rocks.  All you have to do to avoid missing the signs is not be talking about writing, politics, religion or football. Or anything.

To begin with, we were right on track, literally and figuratively even though we were seriously distracted by an abandoned building that loomed up out of a hay field like something from a low-rent horror film.

It got even more bizarre as we got closer and saw the massive mural of a naked pregnant woman holding a snake and an apple. No, it’s not Eve; it’s called Lilith by an artist called Violant.  I’m sure the painting put a curse on us for the rest of the day.

Once we’d cleared the farmland, it was back to sand dunes that sit on the top of the cliffs. What?More soft sand? Ricardo, the tour organiser had said we’d be OK with trainers from this point on. Just as well, given that Kieran had trashed his walking boots.  Ricardo must work for Nike – this was no terrain for trainers.

As we trudged into Almograve, we stumbled into a restaurant for a very late lunch of fish soup. It turned out to be the restaurant recommended for dinner so we went back later and had fish stew.  We like fish.

When we finally arrived at our motel, we were greeted by an Australian bottle-brush tree. The massage therapist whom I had booked the day before, told me, as she was squeezing life back into my legs, that bottle-brush plants are great for cleansing your chakras.

If only I’d had my chakra cleansed after we saw that mural I might not have acquired blisters on my heel and foot.