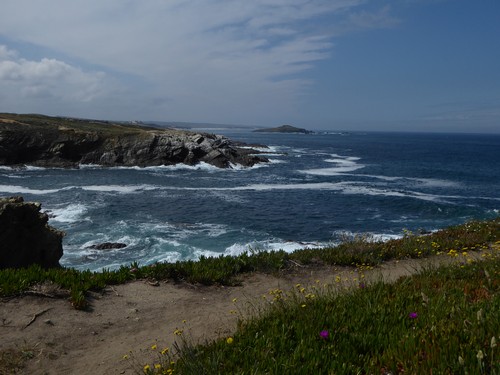 Before I get back into this, a word of explanation and caution.  There’s a special kind of ego and insanity that inspires you to announce you will be writing a daily travel blog. “Oh, will you really?” the Gods of travel smirk as they line up cancelled flights, blistered feet, catatonic exhaustion and a bug in your laptop that causes it to crash every 15 minutes. Wait till it’s written, then announce it, would be my future plan.

OK, on day 3 things get serious.  We are being driven from Vila Nova de Milfontes to Porto Covo … so we can walk back the 20km to Milfontes. We are told to take a litre and a half of water each plus a couple of oranges and nut bars as there is nothing between the two towns apart from sand.  We find a “mini-mercado” in Porto Covo where we purchase the water and manage to buy the only oranges in the whole of Portugal that aren’t bursting with juice.  When I say “we”, of course I mean Kieran.

So off we trudge, the happy wanderers, and soon hit the first stretch of soft sand that we had been warned about.  Being highly dubious about walking poles (we think they are just too nerdy even for us) we’ve bought a pair and share them, one each. Jeez, was that a brilliant idea. Seriously, twenty bloody kilometres of sand dunes, you need all the help you can get.

A couple of 50-something university professors from the USA, on the same tour, disappear off on to the horizon as we struggle along, like extras from Lawrence of Arabia who’ve lost their camels.  We have been assured this will be the hardest day of the hike. Thank God for that. I couldn’t handle anything harder. [Note to self: cycling 60km a week is no training for walking 20km a day through sand].

Six hours after we started, we are back at Milfontes.  A shower and a couple of beers and we decide to try the restaurant opposite the one that was recommended the night before.

It had an interesting menu, but was empty – unlike the preferred option which was pretty busy. The owner was a forlorn figure in the door, so we took pity, despite a Portuguesse game show blaring on the TV.

He obviously decided we were a gay couple – said I was a “lovely man” several times –  and maybe he thought his dream of becoming the go-to gay fish restaurant in Milfontes was finally coming true. I had a beautiful grilled salmon steak while Kieran was defeated by the Porc Combinato which turned out to be basically every conceivable kind of pig meat glued together with melted cheese. It was even more disgusting than it sounds and I had to surrender half my salmon to poor Kieran.

After a disappointing coffee at an allegedly Brazilian café on the way back to the hotel we retired to our rooms, hoping for an easier day on the trail.