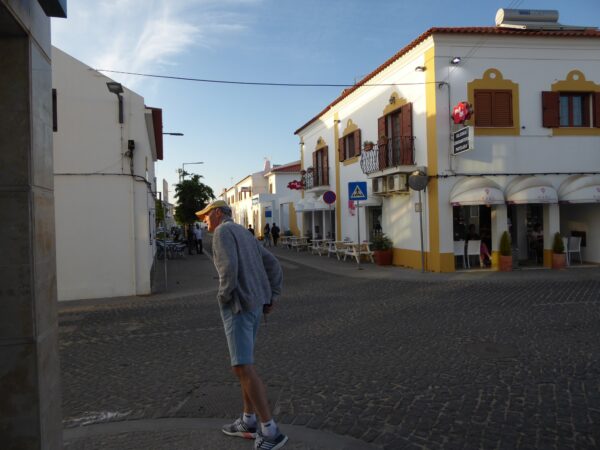 90 minutes till we land at Heathrow and the logjam at the bathrooms is already forming as 300 passengers try to perform a full travel wash, shave and do their hair before landing. I’ll sit this one out.

Phone pings to life as I’m getting off the plane – our 8.10 flight to Lisbon has been cancelled.  We’ve been put on the 1.35 which should be touching down just as our bus to Vila Nova De Milfontes is leaving the Sete Rios bus station

I transfer by robo-train to the main terminal, scoot through immigration then wait 30 minutes as the bags appear to be being unload one by one. Customs are unmanned on the Nothing To Declare side so I jog through and take the free Heathrow express to Terminal 2 where Kieran is already in the queue of disgruntled TAP passengers.

Using the old trick of not screaming at someone who has been screamed at all morning, Kieran gets us on a BA plane leaving half an hour earlier than our original TAP flight.  This means we have to literally run through the tunnels and along the travelators to get to Terminal 3.

I arrive at the security check dishevelled from a night on a plane, stressed from the cancellation experience and sweating profusely from the mad charge between terminals.  I must look like a terrorism suspect from Central Casting.  But then I somewhat cynically let a pleasant, chatty, brown-skinned elderly man get ahead of me in the cue.

My stuff – a tangle of phones, laptops, chargers and cables that I haven’t had time to sort out after the flight – zips through the X-Ray machine unchallenged. The small brown man is pulled aside for a search.  Hey, maybe racial profiling isn’t such a bad thing (I’m joking, for God’s sake!).

On the plane, we are told that due to an air traffic control strike in France, we’ll have to sit on the tarmac for a couple of hours until they can get a clear flight path to London. Groans all round until the pilot stops in mid-sentence and says. ‘My goodness … they’ve just cleared us for take-off’.

Lisbon Airport arrivals is a seething mass of people whom it’s reasonable to assume are all victims of the French strike, in some way or another. The airport is unlikely to challenge Singapore, Amsterdam or Dubai in the best airport in the world stakes any time soon.  It is being renovated, true, which does nothing to add to its current sense of slightly organised chaos.

Immigration is long queues, great confusion,  faulty equipment and passengers who don’t have a clue how it works or even whether they have the right kind of passport. Baggage reclaim is a little too efficient.  The first bags are taken off the carousel by an airport worker.  It’s only after we have waited until the carousel stopped for Kieran’s case, that we realise the stack of cases at the side isn’t a massive tour group but luggage taken off to make room for more bags coming through.  It’s been sitting there all the time.

The Brits politely queuing in one very, very long line at Customs while everyone else surges forward in a rolling maul.  We join the “others” in the tidal wave of humanity, jamming trolleys into ankles accidentally (but not always). One older gent carves his way through the crowd,  using his trolley like a snow plough while his wife follows in his wake, apologising theatrically.

We foolishly wait until we have cleared immigration before we look for an airport lounge in which to while away the hours before catching the bus south.  Neither of us fancies schlepping suitcases through a city we don’t know.  Too bad, the lounges are all on ‘air-side’ but a hairdressesser doubles as a spa so I can have a shower as long as I book a massage. Win-win.

We sample our first pastel de nata (Portuguese custard tart, to you)  which set a benchmark for the rest of the trip. The coffee in the airport café isn’t half bad either.  Maybe this trip is going to be OK.

Finally we take the Airport Bus to the Sete Rios bus station and board the coach for Vila Nova de Milfontes, to the south of Lisbon  in the Alentejo  coastal region.

Never mind.  We’re here to hike, not eat. And that starts tomorrow.