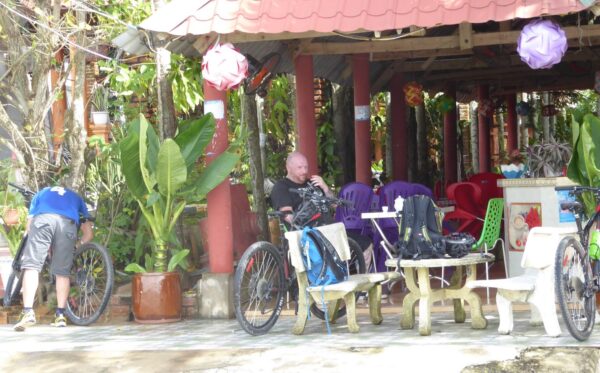 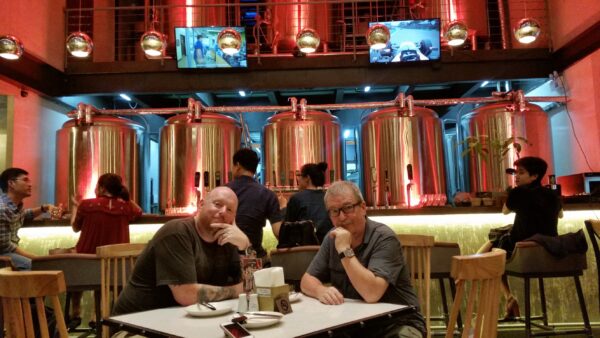 I don’t know what it was that inspired me to embark on a four-day cycling adventure in Vietnam with my (grown-up) son.

We were meeting there to spend a week together anyway but four days of cycling from the coast at Hoi An to the mountain town of Da Lat – albeit with lots of support vehicle time – seemed a little ambitious both physically and emotionally.

A previously fractured, still occasionally fragile relationship might buckle under the strain of a week in each other’s company, even in more serene circumstances, let alone with the added edge of seeing who could get up the hills fastest (or at all).

But a day in Saigon, then two nights in Hanoi were enough to get us past the more painful echoes of the distant past.  After that, it was more about shared fresh experience than ancient injuries.

It’s all about perspective, as I discovered on the second day when, after an hour of cycling, Jamie was suffering in the heat and humidity. 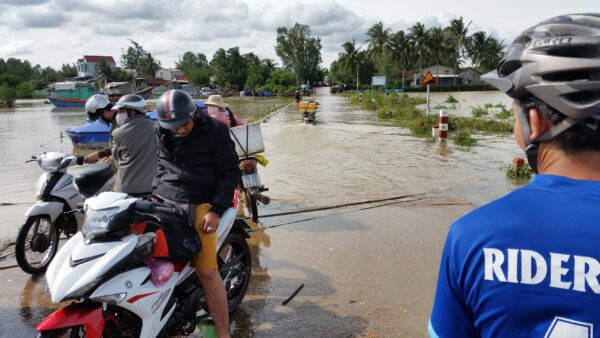 Up to that point, our small procession had been the guide, then me, then the son and heir, taking up the rear as he absorbed the over-abundance of sights, sounds and smells that assail you, travelling through central Vietnam at ground level.

As Jamie poured water over his head, I suggested he take the middle spot, thinking I could keep an eye on him in case he wilted (he has 18 years on me but I have that many fewer kilos of excess baggage).

When we stopped for lunch I asked him if he was OK now.

“Yes, fine,” he replied, then a thought struck him. “Is that why you went to the back?” 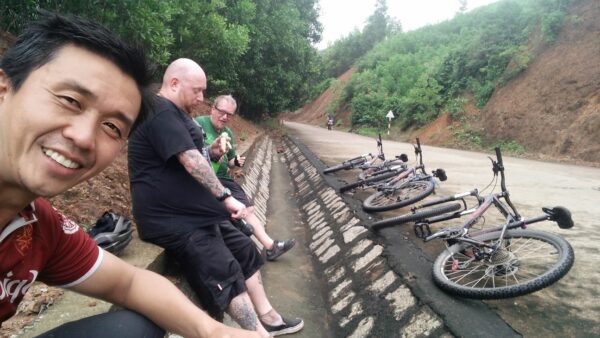 “Oh, I thought it was because you couldn’t keep up!” he said, blithely.

The cycling trip did not get off to the best of starts.  We knew the area we were passing through may or may not have been hit by Typhoon Damrey but an email to the cycle tour company confirmed the trip was going ahead. 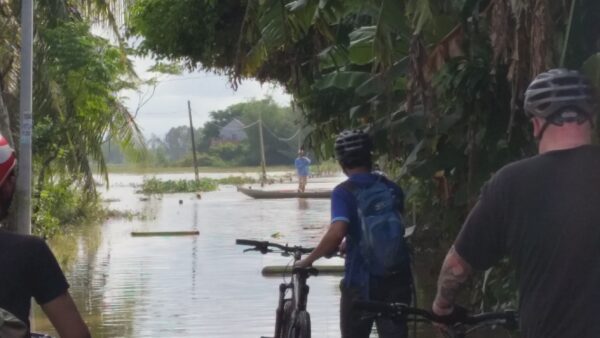 However, when we arrived at Da Nang airport for our transfer to Hoi An, where the tour was due to start the next day, the driver stopped a kilometre along the road when he got a phone call.

At the same time my phone beeped back to life and I got a text telling me not to come to Hoi An – it was under water.  First the rains had hit, then the authorities had opened the upstream dam. The police weren’t even letting people into the town.

Again it’s about perspective. More than 70 people had died in the typhoon so we weren’t making a fuss. All we needed was to know where we were going to be staying that night and if we would be travelling as planned in the morning.

We were eventually delivered to the Luxtery hotel in Da Nang – “a mixture of luxury and mystery” – which was fine.  It seemed to be mostly empty and for our solitary lunch in a massive dining room we were attended on by a waitress who hovered anxiously nearby then suddenly came over and said: “I have to go home now.” 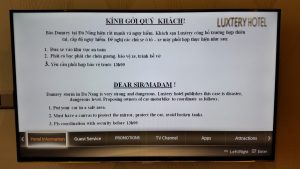 Well, OK.  That’s more than we needed to know, but on you go. Don’t forget your brolly.

That night we ventured across the road, grateful for the $40 North Face rain jackets we had bought in Hanoi the previous day.  We landed up in a Korean barbecue restaurant – more of a shed, really – where the free starter was quail eggs and we had our own mini charcoal barbie on a chair beside our table. 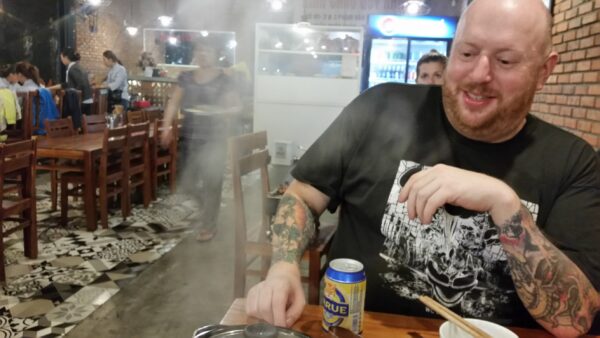 The finale was a dish called something like Beef Lost In Stone and involved pouring beer over the lid of a hotpot which then rumbled, hissed and belched steam like an overactive geyser. It was delicious.

The next morning we met our tour guide Vien and driver Bun and, in an effort to get past the flooding, headed south down Highway One to Binh Son, where we stopped on a muddy corner and were introduced to our bikes for the first time.

They were pretty fancy 18-speed mountain bikes with shock absorbers in the front forks and what look like tractor tyres on the wheels.  We were grateful for the off-road capabilities about five minutes later when our route across a causeway disappeared under a sheet of water. 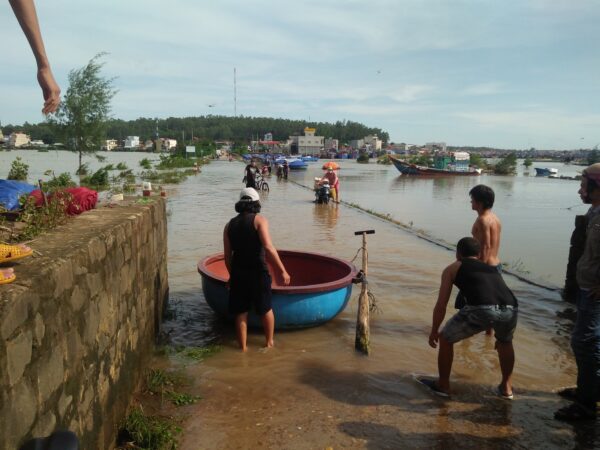 Soon we were wading for the first but certainly not the last time. The rest of the day would see us turned away from flooded roads, forcing us to find less well-policed (and often more flooded) routes.

Our first stop brought us noodles and beer for lunch in an anonymous roadside café.  Later, we had a sobering visit to Son My, site of the notorious My Lai massacre in 1968 when American troops went on a rampage killing up to 500 unarmed men, women and children. 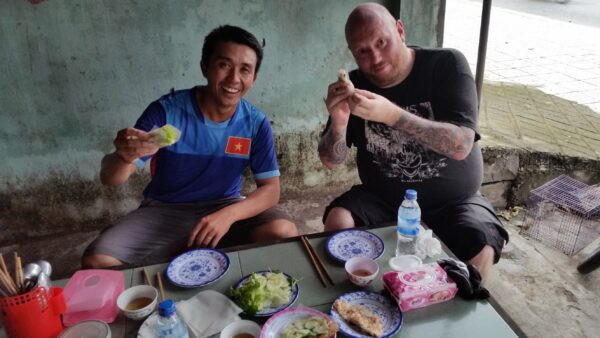 That first night on the road was spent in a strange resort in Sa Huynh.  This was real old school Vietnam – well, post ‘Open Door policy’– built you might imagine for senior party members and their families.

Semi-shuttered because of the typhoon, the dark timber villas and the sound of the crashing surf created a feeling of “Key Largo” and you half-expected Humphrey Bogart to appear and tell us we were stuck there for the duration. 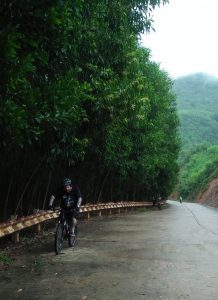 Day two brought our first serious hills – two peaks of about 150 metres each – on which I learned three things. Switching off the squidgy shock absorbers makes going uphill a lot easier and switching them back on again means you can get downhill on a potholed road at high speed without breaking your wrists.

Also, the psychological effects of seeing a sign warning of a 10 degree slope are devastating when you are already running on diminishing self-belief.  On the other hand, father-son competition will get you to that sign in the first place.

Lunch was Vietnamese pancakes, self-wrapped in squares of rice paper that looked suspiciously like old-fashioned toilet roll.  But they were delicious and the lady in the roadside shed had to be asked to stop cooking for us. 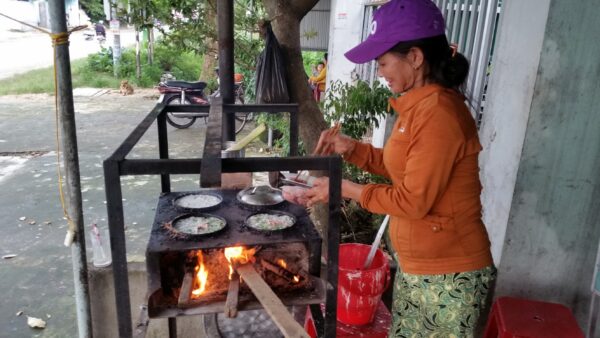 We were still very much in the typhoon-hit region and the sight of small banana plantations, literally flattened by the storm, was heartbreaking.  This was someone’s livelihood, in an area where there isn’t much margin for error when it comes to keeping body and soul together.

Night two was spent in the Seagull Hotel, Quy Nhon.  We were glad of the pictures in the menu which was mostly in Vietnamese and Korean.  I rarely eat in hotels when I’m travelling, but any food in Vietnam is better than your average hotel meal elsewhere.

Day three brought a lot more urban roads and streets and we started by skirting the former US Tuy Hoa airbase (now Dong Tac airport). Despite this being my eighth trip to Vietnam, I was seeing more of the people going about their daily lives that I’d ever experienced before.

Throughout the trip, kids took great delight in shouting “hallo!” as we passed, and giggling when we responded. Some teenagers gave us a rowdy reception as we waded across another flooded causeway in Hoa Hiep Nam, but it was all in good fun and, anyway, they backed off sharpish when they saw Jamie’s tatts.

Finding somewhere for lunch became a quest, as many of the truck stops on the highway were closed due to severe storm damage. 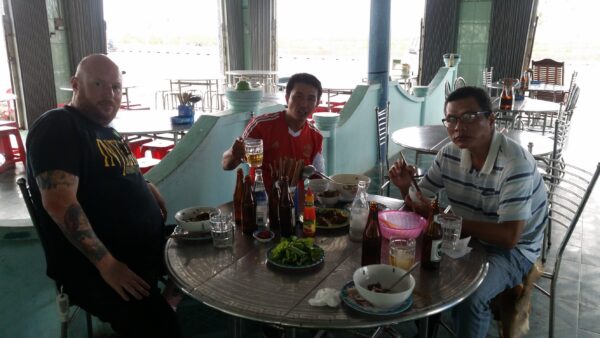 Our hotel on Nah Trang, the Rosaka, was a step up in class and Nah Trang is a noisy, lively, brightly lit tourist town and there were a lot of Chinese and Russian tourists around.

Our last day on the bikes saw us heading for the hills and the former French summer retreat of Da Lat.  The support van did the heavy hill work of the first 100 metres of elevation and, thankfully, the final 1000. In between we had a 35km ride through a glorious valley and finished up with a 15km hilly dash through Da Lat to our hotel, the splendid Monet Garden. 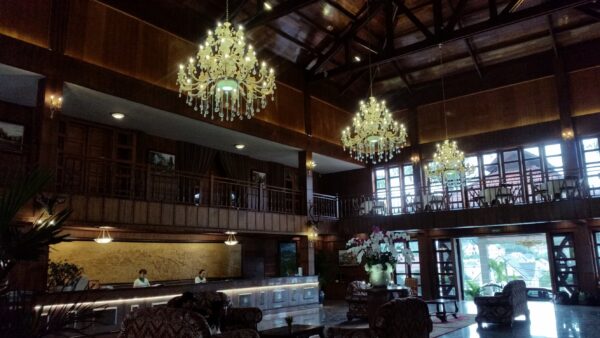 There is nothing quite like cycling through a country where 95 percent of the population travels on two wheels. The food in roadside stalls was so delicious it was almost a cliché, the hotels were pretty good, the guide was encouraging when he needed to be but mindful of our limitations.

We only did 170 km over the four days but the sense of achievement from wading through floods and taking on apparently endless hills was worth the aching muscles. I would recommend this tour to anyone who can ride a bike, but you’d want to ensure all your party had around that same level of fitness and cycling ability.

And as for the father-son issues, I can only speak for myself but I think we built some bridges and smashed a few barriers and that made every pedal stroke doubly worth the effort.