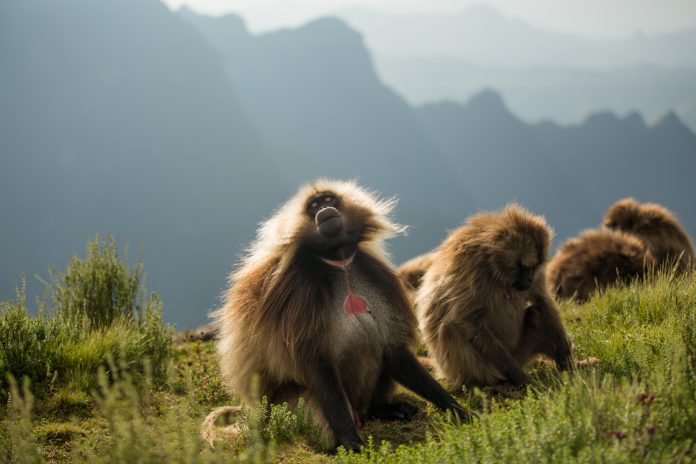 I’m standing close to the edge of a deep gorge, gazing out at the plunging drop framed by the misty blue haze of mountaintops when there’s a movement in the grass behind me.

I almost jump out of my skin and move hastily back from the ledge. I turn just in time to avoid stepping on the toes of a massive, golden lion-maned baboon who’s crept up to investigate a particularly tasty-looking clump of grass. We blink at each other in surprise, and then both scurry warily away.

He lopes off to the safety of a cluster of nearby trees; I step smartly in the opposite direction. But just 10 metres on, I stop. Here there’s a mob of around 30 Gelada baboons, some with tiny babies clinging to their fronts and bigger ones balancing on their backs, running around looking almost like a baboon-jockey version of the Melbourne Cup. Others gambol, play with each other, dig for roots and pick off seeds, and teach their young exactly how to do all of those things.

There’s the walia ibex, a kind of goat-like creature with magnificent arching horns, the black and white colobus monkeys, jackals, hydrax and, if you’re very lucky (I wasn’t), the Ethiopian wolf, one of Africa’s most endangered carnivores and Africa’s rarest canid.

This is an area that’s charmed visitors throughout the years. In the 1920s, intrepid British travel writer Rosita Forbes described it as having “gorges of clouded amethyst” while UNESCO lauded it as “one of the world’s most spectacular landscapes”, with its jagged mountain peaks, deep ravines and precipices plunging over 1,500 metres.

As you stride through grassy meadows scattered with Everlasting Daisies, bright yellow St John’s Wort and golden acacia, it’s easy to understand its charm. And as you scramble up basalt cliffs and admire the breathtaking views in every direction – always looking out for the tragic giant Lobelia, a lofty plant that grows for up to 20 years, flowers once, then dies – the sky’s rarely empty either.

The park is revered by birders for its variety and sheer numbers, with awe-inspiring glimpses of the huge lammergeiers, the Bearded vultures, with their two-metre wingspan, and Tawny eagles.

I find it enormous fun to trek in a place that’s both stunningly beautiful and teeming with wildlife. So often I’ve trudged along mountain passes, down ravines and across vast plains, feeling ineffably lonely. Scenic magnificence is all very well, but when you’re the only living being on the horizon, it can also be just a little oppressive.

Enjoying it in the company of so many creatures adds another dimension to the whole experience. “And they’re all animals that are more scared of humans than you are of them,” says local guide Shiferaw Asrat. “That’s always reassuring.

“As Ethiopia becomes more and more of an emerging tourism destination, we’re seeing so many more people finding out about this national park and inquiring about coming here.”

Those numbers have been boosted by the opening up of new hiking trails, the program of enticing locals with offers of new free housing out of the ranges and down into villages outside the protected areas, and also a brand new luxury eco-lodge to stay in.

Asrat played a huge role in that. Together with fellow guide Meles Yemata, he saw the need for accommodation in the mountains and gathered 150 workers from a local village to build the Limalimo Lodge on a 2900-metre-high ledge from local stone hauled up the slopes, rammed earth, eucalyptus wood for ceilings and vast expanses of glass. Then, when they’d finished, he employed 38 of those to work there, and launched in early 2017.

“The staff are now the heart and soul of this place,” Asrat says, sitting in the vast communal space at the centre of the complex, away from the large individual villas now hidden away amongst the trees on the mountain slopes. “People love coming here as it feels so secluded.”

After a hard day’s trekking, it’s certainly a fabulous place to unwind, especially with a drink in hand watching the sunset casting a scarlet glow over the mountain peaks … and the trails you’ve just conquered.

SIX OF THE WORLD’S OTHER GREAT TREKS

Nepal – The Annapurna Circuit (up to 20 days) with great Himalayan scenery, lots of teahouses to stay in and altitudes from 760 metres to 5420 metres. nepaltrekkinginfo.com

Patagonia – The W Route in Torres del Paine national park in Chile (4-6 days), through spectacular mountains and around glaciers, waterfalls and lakes, with the highest point at 1240 metres. torresdelpaine.com/en

Scotland – West Highland Way (7-8 days), in the Scottish Highlands, going from Glasgow to the beauty of Loch Lomond, through the moors to the foot of Ben Nevis. westhighlandway.org

Italy – Cinque Terre (2-4 days) is a busy route these days, but with good reason: that trek between the five fishing villages high on the cliffside with dizzying views of the coastline is one of the world’s most magical journeys. parconazionale5terre.it/

Limalimo Lodge (limalimolodge.com) costs from US$150 per person per night, including meals and some drinks.

Peregrine offers a range of tours around the country, including a trek through the Simien National Park, on the ten-day Highlights of Ethiopia, costing from $4,830 per person twin-share. peregrineadventures.com

Sue Williams was a guest of Peregrine

Easy riding across the roof of the world

Easy riding across the roof of the world

Marvels of the Med in two Viking small-ship cruises

Discover the other side of Italy

Six top countries with coffee in their veins