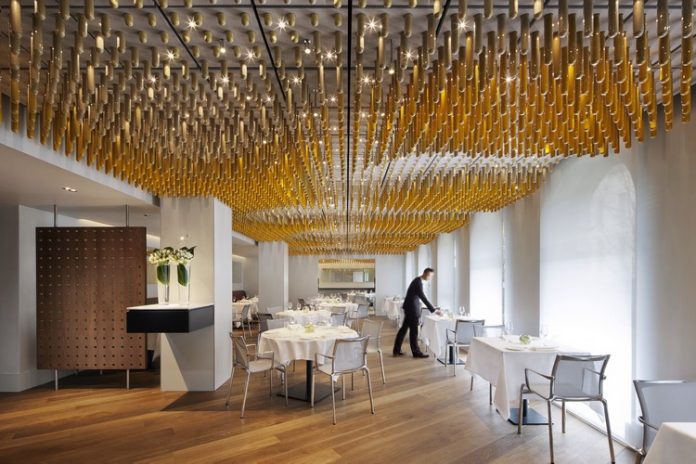 4.5 / 5 stars
THE LOCATION
When the letter comes that you’re being awarded a knighthood, this is the hotel to
stay. Only a hop, skip and a jump from Buckingham Palace, you’ll be able to have
tea with the Queen and still get back in time for afternoon champagne. On a quiet
street in Belgravia just off Buckingham Palace Garden and Green Park on the other
side, it’s also extremely handy for Harrods for that special outfit for the day, or
Sloane Street or Chelsea if you’re looking for something a little quirkier. Getting in
and out is a cinch too, via a five-minute cab drive from Victoria Station for the direct
line to Gatwick Airport.

THE SPACE
London’s first design-led boutique hotel when it was built 26 years ago, with a
Georgian-styled façade of weathered bricks, Portland stone and arching windows, it
blends in beautifully with its surroundings. Inside, it’s a different world, however, with contemporary styling by Italian architects Laboratorio Associati of Milan which
became a benchmark for modern hotels around the world. It has 41 generously-
sized rooms and suites, off curved corridors panelled in black corrugated wood. The
lobby has a high atrium ceiling painted with a skyscape, with 24-hour concierge to
reserve theatre tickets and order limousines, a bar to the side and a small gym in the building. Guests are free to use the spa in the sister hotel, the COMO Metropolitan, 10 minutes’ walk away.

THE ROOM
The very first hotel from the international COMO Hotels and Resorts group, it
smashed records from the start, with the unprecedented sum – for 1991 – of a
million pounds spent on each individually designed and decorated room. The style is
open plan, the décor is simple and elegant, the bathrooms are Italian marble (of
course), there’s good desk space (a personal favourite), and my suite also had a
private balcony with table and chairs. Everything, like temperature, lighting, doorbell, butler call and electronic ‘Do Not Disturb’ sign is operated from a touchscreen console.

Ah! The food! The hotel has Basque restaurant Ametsa on site, the first venture
overseas of the celebrated three-Michelin-starred Arzak in San Sebastian, Spain,
which, within six months of its opening four years ago, received a Michelin star of its
own. It’s an attention-grabbing space, with 7,000 glass tubes filled with colourful
spices dangling from the ceiling, and an interesting menu of locally-sourced and
organic produce from the owner, Elena Arzak, who was voted the World’s Best
Female Chef in 2012. I tried a tasting menu, including seared scallops, a hemp
cracker and parsley puree, and monkfish with tapioca caviar and a mango reduction,
with all courses paired with Spanish wines. Delicious!

STEPPING OUT
It’s a short walk to the fun boutiques of Sloane Street, the theatres of Piccadilly and
the restaurants of Mayfair, and so easy for connections to both Gatwick and
Heathrow.
THE VERDICT
Apparently 25 per cent of reservations for this hotel are from repeat guests, and you
can understand why. The service is friendly – some of the concierge have been here
since it opened – and discreet, the rooms are beautiful and the central London
setting is incredibly convenient.
HIGHLIGHT
The food is pretty sublime, from the innovative dishes of Ametsa to the tapas you
can have in the hotel bar, and the healthy breakfasts.
LOWLIGHT
It can be hard getting a late checkout. The hotel’s so popular – and comparatively
small – it seems to be often booked out.
ESSENTIALS
COMO The Halkin, 5 Halkin Street, Belgravia, London SW1
Entry rate £475 per room a night.
Phone +44 (0) 207 333 1000. See www.comohotels.com/thehalkin
Rating: 4.5 out of 5
 Sue Williams stayed courtesy of COMO Hotels and Resorts.