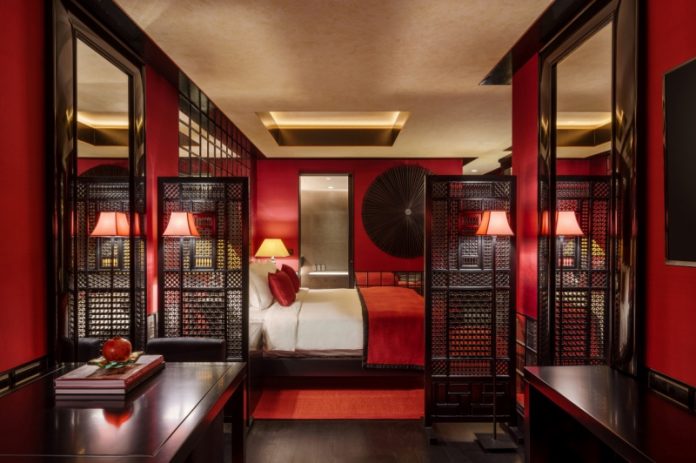 Fifty years ago she was the Kiwi Bond Girl, playing opposite, George Lazenby, the only 007 ever to hail from Australia. Half a century later she’s one of the world’s architectural style icons, with passion and energy to burn.

When the legendary – and now 76-year-old – Anouska Hempel arrived at 10pm after a 14-hour flight from her current home in London to inspect the fixtures and fittings of the new five-star boutique hotel she’d designed in Singapore, everyone expected her to sleep.

“And she didn’t at all,” says Marina Mathews, spokesperson at the Six Senses Duxton. “She was inspecting things and fixing everything until midnight. She only does the occasional project – her ‘passion’ projects – and when she’s working on them, it seems she has the energy of a 26 year old!”

This project, the first city hotel from the Six Senses hospitality and wellness company, certainly bears witness to that passion. The redesign of a row of eight early-19th Century traditional shophouses into a slick modern hotel close to the centre of Chinatown has become a stunning shrine to good taste, while also winning a national architectural heritage award.

It’s the latest hotel hit from the model and actor turned designer who went to school in Sydney’s south before moving to England in the swinging 1960s with just 10 pounds to her name. The woman who went on to play opposite George Lazenby’s Bond in On Her Majesty’s Secret Service, later launched one of the world’s first luxury boutique hotels, Blake’s in London in 1978, and now has a string of successful establishments behind her.

This new 49-room heritage addition in Singapore is just as spectacular. Going through the front doors, you enter a sleek Chinese-Malay-European world of black lacquer, gold and yellow with Chinese screens, wallpaper made from reproduced old land contracts from the 1700s, and calligraphy brushes of all shapes and sizes.

Screened off to one side are the 50-seat Yellow Pot modern Chinese restaurant and the striking 20-seat antiquarian-themed cocktail bar with its heritage stained-glass ceiling, mustard, black and gold colour theme, and objets d’art from Hempel’s own collection from around the world.

On first sight, it took a few moments to realise I hadn’t actually drawn breath, so taken aback was I by the vision of pure, unadulterated glamour.

But it’s not only about the form. The giant Chinese script in gold by the entrance – translating as Prosperity, Happiness and Health, and Longevity – reminds us that this is a Six Senses hotel which prioritises its guests leaving healthier than when they arrived.

That mission starts from the beginning too, when you’re invited to take off your shoes and step into a giant bronze Himalayan ‘singing bowl’ for a few moments of quiet mindfulness. As you stand there, with your eyes closed, the bowl is struck with a gong and the vibrations pulse through you, so you don’t actually even have the space of think of anything else.

There’s a normal-sized singing bowl in every room as well to allow you to continue the practice.

Every guest is also invited to a personal consultation with a physician of traditional Chinese medicine. Happily, mine gave me the all-clear. Sadly, I fared less well with the outdoor yoga class … but plenty of individual tuition to stop me falling behind.

After December 1, guests will also be able to use the spa, rooftop lap pool and gym of the sister hotel, Six Senses Maxwell, that will open five minutes’ walk away.

Back at the Duxton, you find two chilled little glass bottles of complimentary tinctures in the in-room minibar every day; one to be taken first thing in the morning to detox and the other to be taken last thing at night to improve sleep and reduce anxiety.

Finally, there’s a little wellness bag placed in the room at turndown, with Tiger Balm, digestive pills, an adult colouring card and pencils, nutmeg oil for muscle aches and brainteaser puzzles for keeping the mind sharp. And no, I couldn’t do any of those either.

The rooms are also quirky sanctuaries of style, either all-black or all-white and with no two exactly the same, depending on the historical layout of the original three-storey buildings. Some are two-storey with the living area downstairs and the bedroom upstairs, linked with a restored spiral staircase, others have four-poster beds and a few even have skylights.

Yet it’s in the cocktail bar where you perhaps get the greatest sense of Anouska Hempel herself.

It’s hard to go past the cocktail On Her Majesty’s Secret Service – a dry gin martini with yuzu and green tea bitters. But for the more determinedly dashing, there are also three variations of the Bond-approved classic martini, including a dirty martini with house-made pickled green chilli and brine, and clouded rather than shaken or stirred.

You can fly to Singapore with many airlines, including Qantas, Singapore Airlines and Scoot.

Yellow Pot at the hotel serves both classic and innovative Chinese cuisine, with the accent on healthy, organic ingredients, and is decorated with yellow pots of all shapes and sizes.